Plans continue to take shape for the facility project that is being developed for the south end zone at Memorial Stadium/Faurot Field. Mizzou Athletics has enjoyed great success in the initial fundraising stages for the project to date, and while the need for continued fundraising is vital, the timeline for the project is moving along nicely. Preliminary studies indicate the scope of the project will likely be larger than initially anticipated. 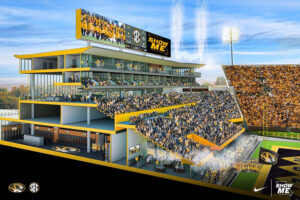 “As we’ve had the chance to roll our sleeves up and get further into the planning stages, we believe it’s a better option to take down the existing south bowl, rather than leaving the structure up and retrofitting around it,” said Director of Athletics Jim Sterk. “Our preliminary study suggested that if we go this route, we will have more premium seating opportunities, and it will give us the ability to provide more space for our football program and its daily operations. We’ve said all along that we are doing this with the intent of making it one of the best facilities in the nation, and that’s exactly what we’re planning,” he said.

Sterk said that the range of the project should come in between $90-100 million in total costs, up from the initial estimate of $75 million.

“The added revenue we will be able to generate from having more premium seating space gives us the ability to benefit not only our football program with more space, but also to provide enhancements that will be exciting for our donors and fans,” Sterk said. 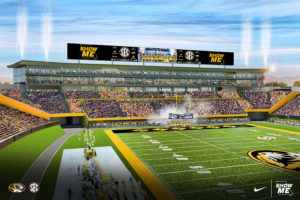 Over the two-year construction process, the project itself, when combined with Mizzou Athletics’ annual economic influence, could provide as much as $700 million in regional economic impact. According to CS&L, (Convention, Sports and Leisure, a consultant firm working with Athletics), as many as 1,200 new jobs will be created because of the project, which could result in as much as $44 million in new salaries.

“The University of Missouri is one of the state’s greatest assets, and projects like this have tremendous economic impact on our local and state economies,” said Interim Chancellor Hank Foley. “This project will allow us to expand the scope of our football program, bringing additional exposure for Mizzou and greater amenities for our fans.”

The process of selecting an architect and construction manager is underway, and the project will be up for approval by the University of Missouri Board of Curators in February. Once approved, a timeline for the project will be further defined, with more design work to follow.

Sterk said there is still important work to be done from a fundraising standpoint. “The support we’ve had so far has been outstanding, as we’ve received a record six gifts of at least seven figures,” he said. “It’s very encouraging, but we are still working hard. We have had some promising conversations with potential contributors, and we hope to continue making those exciting gift announcements going forward,” Sterk said.