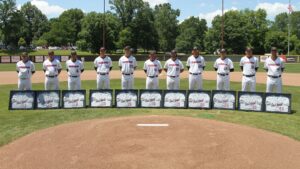 Senior Hunter Leeper added his name to Southeast Missouri’s history books by playing all nine defensive positions in Saturday’s regular-season finale. The Redhawks fell in the game to Belmont, 6-5.

The Redhawks finish the regular season with a 35-18 overall record and a 22-8 Ohio Valley Conference record. Belmont finishes 31-25, 17-13 OVC. Both teams will partake in next week’s OVC Tournament in Jackson, Tennessee.

Leeper started the game behind the plate then made his way to left, center, and right field, entered the infield at first, second, third, then shortstop, and pitched to one batter in the ninth inning to complete his trip around the field.

The Redhawks honored the careers of 11 senior student-athletes prior to the game, all of whom played their final game at Capaha Field Saturday.

It was a close game throughout as Belmont narrowly outhit Southeast, 12-11.

Along with playing all nine positions on the field, Leeper had a good day offensively, picking up two hits, two RBI, and drawing two walks.

Robert Beltran pitched five innings in his start. He allowed three runs on seven hits, struck out five and walked just one. Beltran exited the game with a lead but would suffer a no decision.

Jake Busiek pitched two and a third innings of one-run baseball out of the pen Saturday. Matthew Wade (0-2) suffered the loss after allowing the go-ahead run to the Bruins in the top of the ninth.

Freshman Bruin Dylan King pitched three innings in his start. He allowed three runs on five hits. Connor Ethridge (3-2), the fifth pitcher used by the Bruins, picked up the win. Ethridge pitched the final two innings of the game.

Belmont designated hitter Clay Payne hit a solo home run to left field in the top of the second inning, putting the Bruins on the board, 1-0.

Southeast tied the game and found a lead in the bottom of the inning. Leeper started the inning with a leadoff walk and he advanced to second on a wild pitch. Leeper came around to score on an RBI single off the bat of Brian Lees, tying the game. After a single by Trevor Ezell, Chris Osborne doubled to deep center field, bringing Lees around to score; however, Ezell was out at home on the play. Southeast led 2-1 after two innings.

A throwing error by Beltran in the top of the third on a sacrifice bunt attempt allowed Belmont to score the tying run, 2-2. The Bruins put runners on second and third with one out in the inning but Beltran picked up a pair of strikeouts to get out of the jam.

Dan Holst poked a one-out single past the first baseman in the bottom of the third and moved up to second on a groundout by Scott Mitchell. Leeper lined a single to left field, scoring Holst and putting the Redhawks back on top, 3-2.

Branden Boggetto drove in Ezell in the bottom of the fourth to widen the Redhawk lead to 4-2.

With two on and two out, Payne drove in Kyle Conger in the top of the fifth to cut the Southeast lead to 4-3. The tying run was out at home on a relay throw home on the play, ending the inning and preserving the lead.

Leeper drove in his second run of the game in the bottom of the fifth with a single to left center, plating Holst and bringing the lead back to two, 5-3.

Belmont cut the lead to one in the eighth inning on an RBI single by Ben Kocher, 5-4.

Pinch hitter Rafael Bournigal plated the tying run in the top of the ninth with a single up the middle. With two out, Bournigal stole second and scored on a single poked up the middle by Hunter Holland, giving Belmont a 6-5 lead.

Southeast was sent down in order in the bottom of the ninth as Belmont held on to take the series from the Redhawks.

Osborne finished with three hits including two doubles and driving in one run. Ezell and Holst joined Leeper in picking up two hits in the game.

Five individual Bruins each had two hits in the game.

Southeast Missouri will set its sites on the OVC Tournament next week in Jackson. The Redhawks, who will hold the No. 1 seed in the tournament, will play their first game at 7 p.m. Thursday, May 26.

Previous Post: « Billikens finish regular season with sweep, earn 4 seed for A-10 Tourney
Next Post: Mizzou baseball the 11 seed for the SEC Tourney »