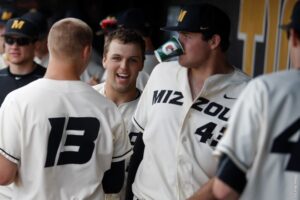 Mizzou Baseball dropped its series finale at No. 12 South Carolina on Sunday afternoon (April 24), 9-2, thanks in large part to South Carolina RF Gene Cone, who had five hits, three RBI and three runs while finishing a homer shy of the cycle. The loss drops Mizzou to 20-21 and 4-14 in SEC play while South Carolina goes to 33-8 and 14-4 in SEC play.

Mizzou starter Michael Plassmeyer (St. Louis, Mo.) took the loss after going 3.2 innings, allowing seven hits and five runs (all earned) while striking out three and walking none. He falls to 3-4 on the year. South Carolina freshman starter Adam Hill earned the win, moving to 6-0 on the year. He scattered just four hits over 6.1 shutout innings, striking out eight and walking just one while hitting a batter.

Mizzou senior 1B Zach Lavy (Auxvasse, Mo.) continued his All-SEC caliber season with an RBI double in the eighth inning. He now leads the SEC with 16 doubles and 27 extra-base hits this season. The RBI was his team-leading 36th of the season. Lavy’s 16 doubles are the most by a Tiger since Jonah Schmidt had 17 in 2011 while Lavy still has 15 regular season games remaining.

Mizzou threatened in the first inning as Jake Ring (Ingleside, Ill.) and Ryan Howard (St. Charles, Mo.) roped back-to-back one-out singles to put two men aboard. But Hill struck out Lavy and Trey Harris (Powder Springs, Ga.) to strand a pair. South Carolina then took command of the game early with a two-spot in the first inning, sparked by a leadoff triple from RF Gene Cone.

Plassmeyer settled in during the second inning for an easy 1-2-3 inning, highlighted by a running, over-the-shoulder catch in center by Ring on a ball hit by Madison Stokes. Mizzou then stranded a pair again in the third inning as Howard and Lavy flew out in consecutive at-bats with two men aboard as Mizzou stranded four through three innings.

South Carolina got another run in the third, again sparked by an extra-base hit from Cone as he doubled off the wall in right. He was then singled in by TJ Hopkins, but Plassmeyer got a pair of strikeouts to get out of the inning allowing only the one run.

Cone again got to Mizzou in the fourth, roping a bases-loaded delivery up the middle for his third hit of the day to plate two more and extend Carolina’s lead to 5-0. Cone drove in South Carolina’s sixth run on hi second double of the day in the sixth inning to make it 6-0 after six. He was gunned at the plate on a great play by Lavy to fire home for the third out after a ball caromed off of RHP Grant Macciocchi’s (West Chester Township, Ohio) glove and to Ian Nelson (Lake St. Louis, Mo.) at second. Nelson fired to Lavy to try and get the out and then Lavy fired home to get Cone who was attempting to score from second.

Lavy then sparked a two-out rally in the eighth, roping a double off the wall the other way into left center to score Howard from first. Harris then lined one through the right side to score Lavy as Mizzou scored a pair in the frame. South Carolina got those runs back and more in the eighth, plating three runs on four hits and a walk.

Mizzou will return home to close a streak of eight consecutive games against ranked teams Tuesday when it hosts in-state rival Missouri State.