The state Supreme Court will not weigh in on whether the state Senate can bar some from recording its hearings, at least not now. 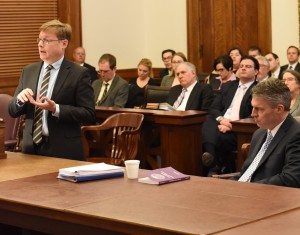 Liberal advocacy group Progress Missouri sued the Senate and several individual senators after it was prevented from recording some hearings. It said the Senate should not be able to prevent anyone from recording its hearings because of Missouri’s open records and meetings law. The Attorney General’s Office on behalf of the Senate argued that as a branch of government, the Senate can create its own rules for hearings that supersede the Sunshine Law.

A Cole County Judge dismissed the case and Progress Missouri appealed. The Missouri Supreme Court listened to arguments last week but many questions from the judges centered on whether the case should have gone to it.

The attorney for Progress Missouri, Christopher Grant, said for the Court to issue this order is not a loss.

“I’m not surprised that came up,” said Grant. “If we had to go back down we’d just argue it there and then we’d be back at the Supreme Court. I think this is ultimately, the Supreme Court is the place to resolve this question.”

Depending on any decisions and appeals that are filed, the case could still wind up back before the Supreme Court.