You are here: Home / Sports / Missouri State director of athletics appointed to serve on Division I FCS selection panel 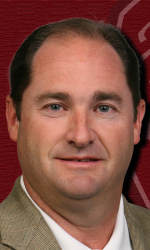 The NCAA announced this week that Kyle Moats, director of athletics at Missouri State University, has been appointed to serve on its Division I Football Championship Committee, effective immediately.

Moats replaces former Northern Iowa AD Troy Dannen on the committee and will serve out the remainder of Dannen’s term through August 31, 2017. At the end of that term, Moats would be eligible to be reappointed for an additional four-year term.

“I’m honored to be appointed to this committee and help it shape the future of the Football Championship Subdivision,” said Moats. “I’m looking forward to the opportunity to work with some great athletic administrators and the NCAA staff as part of the committee.”

Moats is completing his seventh year as director of athletics at Missouri State, which is a member of the Missouri Valley Football Conference.