A proposed change in the state budget could allow opponents of the death penalty to attempt to pull funding for it. 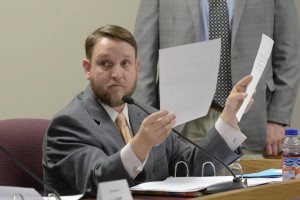 Members of Missouri’s execution team are paid in cash to keep their identities hidden, per the law – that includes the doctor that administers a lethal injection and a compounding pharmacy that makes the pentobarbital used. That money has come out of a fund for expenses and equipment in the Department of Corrections’ budget, so state lawmakers and others looking at the budget didn’t know how much was spent on executions.

A House subcommittee approved Representative Jeremy LaFaver’s (D-Kansas City) proposal to create a specific line in the budget for executions.

“Including it in the budget in this fashion I think is going to allow for a little better transparency and tracking of this important task that our state does,” said LaFaver.

If his action stands, legislators who oppose the death penalty could now see where it’s funded in the budget and by how much, and could propose pulling that money. LaFaver wouldn’t say if a proposal to pull the money for executions will be offered.

The idea passed a mostly-Republican committee chaired by Representative Kathie Conway (R-St. Charles), who says she supports the need for transparency as long as no identities of execution team members are released. Conway also said there is little chance an effort to defund executions would clear the Republican legislature.

“From what I heard happened in the Senate [Monday], yes I think that most Republicans are [in favor of the death penalty]. Personally, I am,” said Conway.

On Monday the state Senate debated a proposed repeal of the death penalty. Most Republicans spoke against it and the issue was tabled.

The line LaFaver’s action created includes a proposed amount of half-a-million dollars. Conway expressed concern about tying up that much money with the expectation that few executions will be scheduled during the 12 months it covers, beginning July 1.

LaFaver agreed to offer an amendment to reduce that amount to more closely reflect the execution-related expenses the Corrections Department expects, but he also wants additional money to cover potential federal fines. He referred to the Corrections Department Director, George Lombardi, last week telling the budget committee that the state has not issued federal tax reporting forms, or 1099s, to members of its execution team going back to the mid 1980s.

LaFaver said money in that line beyond the projected costs of executions, “would also allow for the payment of any penalties that would be assessed to the state from the IRS for not complying with the federal tax law requirements of issuing a 1099.”

LaFaver said he will work to come up with a figure more reflective of potential execution costs and IRS penalties to propose to the full budget committee when it considers the corrections budget.

The full budget committee is the next stop for that bill.