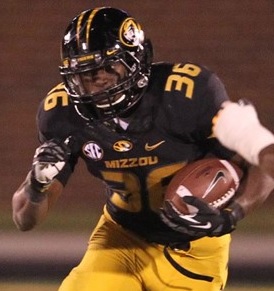 Mizzou running back Morgan Steward has retired from football, never recovering from a hip injury that forced him to miss all of 2014 and hold him to just ten attempts in three games in 2015 after trying to return from surgery.

Steward came to Mizzou with a lot of potential coming out of Staley where he was the career rushing leader (4,184 career yards, 46 rushing touchdowns), in 52 starts.  He led his team to a 13-0 record and a Missouri State Championship in Class 5A as a senior, rushing for 205 yards and one touchdown in the 35-21 win over Kirkwood in the 2011 Show-Me Bowl.

He finishes his college career with 102 yards on 31 carries and one touchdown which came against Murray State in his first college game.