(NASCAR)–Columbia’s Carl Edwards has won his second premier NASCAR race of the season, the Southern 500 at historic Darlington Raceway, the oldest track on NASCAR’s top series Sunday night. He won the series’ longest-distance race, the 600-miler at Charlotte, on Memorial Day weekend. Darlington is considered the longest race by time—more than four and a half hours. He came from two laps down and 38th place for the victory. He had fallen behind after a flat tire early in the race. The win is Edwards’ 25th career win, tying him with Hamlin and Dale Earnhardt Jr., for eighth among active drivers. 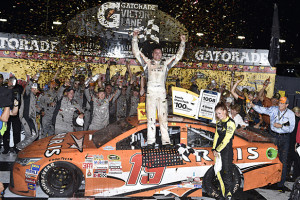 Edwards got the lead by inches ahead of pole sitter Brad Keselowski coming out of the pits after the last yellow flag stop with eleven laps to go, then held off teammate Denny Hamlin on the restart. Keselowski finished second, Hamlin third, Joey Logano fourth and Kevin Harvick fifth.

The race was run with NASCAR’s low-downforce aerodynamic package that Edwards has advocated for several years. Edwards told NBC in victory lane, “This is as good as it gets. This is what it’s about. We’re sliding cars, the tires are falling off. This is the style of racing that I love.” He said he hopes NASCAR uses the same package during the ten-race chase for the championship that starts in two weeks, but NASCAR had said earlier it had no plans to do so.

Joplin’s Jamie McMurray finished fourteenth, protecting his tenth-place points position. He and Edwards are both locked into the Chase, Edwards as a winner of at least one race and McMurray as the highest-ranking non-winner in the points.

Sometime-Missourian Clint Bowyer finished seventeenth in the race and heads to Richmond next weekend clinging to the sixteenth and final spot in the Chase.

The regular NASCAR season concludes next weekend at Richmond before the top sixteen drivers start the drive-off for the 2015 championship.

(FORMULA 1)—Lewis Hamilton tightened his stranglehold on the Formula 1 points standings with his seventh win of the season, finishing 25.042 seconds ahead of Sebastian Vettel. Race stewards checked reports that Hamilton had run with tire pressures below the recommended minimums. Althoughj his tires were three-tenths of a pound of pressure low, stewards ruled he was still driving within safe operating conditions. The penalty for running tires with unsafe air pressures is a 25-second increase in elapsed time for the race.

(INDYCAR)—The funeral for driver Justin Wilson will be Wednesday morning at St. James the Great Church in Paulersbury, Northhamptonshire, England. A memorial service will be held later in Indianapolis. Wilson was killed when he was hit by a piece of debris from a crashing car in front of him, August 24th, at Pocono. Several fund raisers for the Wilson family are being held. A special one begins September 14 on eBay when the helmets worn by all drivers in the IndyCar final race at Sonoma will be auctioned. A special fund also has been set up for his children at the Forum Credit Union in Indianapolis.