You are here: Home / Sports / Brian Elliott sets a Blues franchise mark and the team moves into a tie for first place in the Western Conference 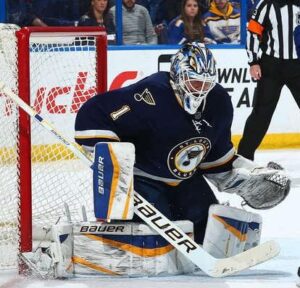 Alexander Steen scored twice and Brian Elliott made 25 saves in the Blues 4-0 win the Calgary Flames on the road Tuesday. Jori Lehtera and David Backes also scored for the Blues (45-20-5).  For Elliott, it was his 21st shutout with the Blues, breaking a tie with Jaroslav Halak for the franchise record. The Blues haven’t allowed a goal in over two full regulation games (126 minutes, 16 seconds).  Elliott was once Halak’s backup.

“Looking back right now on my career, I’m not here for that long and I never thought I’d be in St. Louis. It’s pretty cool to be at the top there right now,” said Elliott. “It has a lot to do with how our team plays the past four years. Great attention to detail and guys sacrificing in front of me, blocking shots like you saw tonight.”

The Blues have won five of their past six games, including two straight and three of the past four via shutout, to jump into first place in the West. The Blues and Anaheim Ducks each have 95 points, but the Blues have a game in hand.