The leaders of the newly-appointed Ferguson Commission talk of diversity and unity as they start working on the problems highlighted by the Michael Brown shooting.

The commission appointed by Governor Nixon is 16 people chosen from hundreds of applicants–nine men and seven women, nine African-Americans, seven whites. They come from church, business, education, public service, and activists backgrounds. While some have been involved in politics such as Co-Chairman Rich McClure who was Governor Ashcroft’s Chief of Staff, none of them holds political office today. 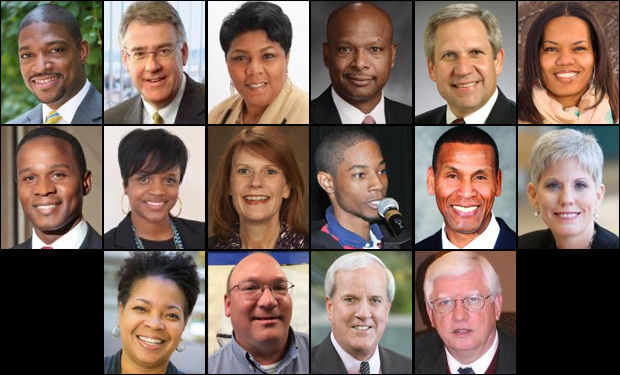 One co-chairman is the Reverend Starsky Wilson (upper left), who says “we’ve got heavy lifting to do as a region. We’ve got to do it together…Pray for the work of the commission. Pray for these Commissioners.  Pray for our community, because we need it.”

McClure (second from top left), now a retired moving company executive, tells the audience at the swearing-in of the commission that the group must be a movement for reconciliation and for healing:  “You don’t have to see eye-to-eye to walk arm and arm. We’ve had too much of  ‘you’ and ‘them’ and not enough of  ‘we’ and ‘us’ and ‘together.'”

Nixon is calling on the commission to “heal the divisions and use this moment to start to walk a different path.” He expects a report by next September 15th.