There have been calls for St. Louis County Prosecutor Bob McCulloch to be removed from the Michael Brown shooting case amid allegations he won’t handle it fairly. Critics cite that McCulloch’s father was a police officer killed in 1964 by a black man. 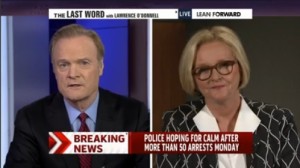 One state senator says she has more than 50,000 signatures calling for his removal.

Governor Jay Nixon (D) has said he will not remove McCulloch, and another noted Missouri politician is standing up for him.

Senator Claire McCaskill (D) tells MSNBC she has known McCulloch for 30 years and has prosecuted alongside of him.

“(McCulloch) said today, ‘I will not walk away from my responsibilities. I was just re-elected,'” says McCaskill. “He has been the prosecutor in this county for almost 25 years, has one of the most professional and respected prosecutor’s office in the state, in fact in the country.”

McCaskill says she’s not sure that the perceptions of those calling for McCulloch’s removal are “grounded or fair.”

“I believe that Bob McCulloch will be fair,” says McCaskill.

McCaskill says were she governor, she would also not remove McCulloch from the case.

“You have to understand the only allegation against this prosecutor is he can’t be fair. Well what does that say to the people of this county?” McCaskill asks. “We have a process in this country where people are elected. You don’t come along and just remove someone from that job unless it is under the powers of an emergency.”

The host of MSNBC’s Last Word, Lawrence O’Donnell, asked McCaskill about the procedure under which two prosecutors in McCulloch’s office will begin to deliver information to the grand jury today. He told McCaskill, “It’s hard to believe that anyone is going to find this adequate,” and added the process could take weeks or months, asking, “How is that kind of delay on what looks like a very simple case with two participants in it – a shooter and the person he’s shooting – how does that kind of delay become acceptable in this case?”

McCaskill defended the process and O’Donnell, “You couldn’t be more wrong about it being simple.”

“You have a lot of forensic evidence that has to be processed, you have trajectory, you have casings, you have blood work, you have DNA work, and not only does that have to be done by the prosecutor’s office, it has to be replicated by the Justice Department,” says McCaskill.

“All of the evidence will come in, so it will take a long time,” she adds.

McCaskill says it will also be important that the County’s investigation and that of the FBI wrap up at about the same time.

“We don’t want there to be a lag in this community where one system has made their decision and the other system hasn’t. We want these decisions to be made at the same time so that there is not this in-between time which obviously could invite more violence.”