You are here: Home / Sports / Southeast Missouri State clinches a berth in the OVC Tournament. Coach Dickey Nutt really proud of how his team has battled (VIDEO) 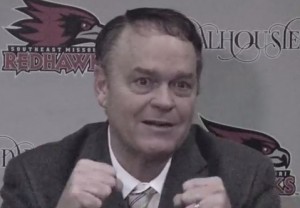 “We played with a lot of pressure on us because we knew how important this game was,” said head coach Dickey Nutt. “Our intensity level was good from start to finish and we did enough to hang on defensively.”