Governor Jay Nixon has outlined his plan to end the shuffling of jobs across the Missouri-Kansas Border in pursuit of incentives meant for the creation of new jobs. 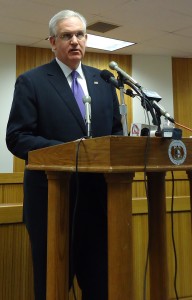 Step one is for he and his counterpart, Kansas Governor Sam Brownback, to put moratoriums on incentives in the Kansas City region. Then he wants both legislature to make those permanent.

A moratorium on discretionary programs could include Community Development Block Grants, the BUILD program, training funds, and the majority of programs under Missouri Works.

Nixon tells Missourinet, “Ultimately we’re going to need the legislature to step up with us to make sure that we’re using the economic development dollars as efficiently and effectively as possible, getting a little more discretion in some of these deals where they are looked at for jobs created in the region, not just jobs moved from one side of the state line to the other.”

He also proposes encouraging local officials in the region to end the use of local tax dollars in “similarly inefficient and counterproductive ways.” Finally, he says, the two states should work together to leverage combined resources to promote the Kansas City region.

Republicans reacted to the Governor’s speech by calling it a “side show,” and accusing him of seeking a power grab.

Senator Ryan Silvey (R-Kansas City) says he and other local leaders were “shocked” at the speech and questioned the Governor’s claim that he’s been working on issue for more than a year.

“This is something that we’ve been working on for months locally in Kansas City with business leaders and legislators and this is the first we’ve heard from the Governor, and what he’s come out with is not something that really any of us are that supportive of.”

Silvey says the Governor’s plan would give him unilateral discretion over economic incentive programs in the region and inject politics into them, two things he thinks the legislature won’t support.

“What the Governor is saying is that he needs discretion,” Silvey says, “so that he can say, ‘Oh, well, this is in the region of the border and therefore even though you may have met the requirements for the incentive, I’m going to say no, you can’t have it.'”

Kansas’ Secretary of Commerce, Pat George, confirmed to the Kansas City Star that discussions have been underway for more than a year, but expressed surprise that Nixon made the speech alone rather than taking part in a joint announcement.

Asked how close Nixon thinks an agreement is, he says his senior staff has been in discussions and he has met with Governor Brownback.