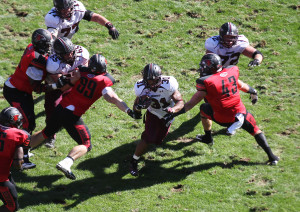 Grounds crews worked overnight to replace the turf since the St. Louis Cardinals return to play in the facility on September 23. UPI/Bill Greenblatt

The Cardinals have six games left at home as they try to not only clinch the NL Central Division, but gain home field advantage through the NL playoffs. That run starts tonight against the Washington Nationals, who were just eliminated from the playoff hunt this weekend.

The Cardinals trail Atlanta by 1.5 games for the best NL record and have a two game edge over Cincinnati and Pittsburgh for the Central.

On Saturday, in front of just 14,000+ fans, SEMO and SIU played a football game on the outfield of Busch Stadium and just tore the turf up to shreds. The grounds crew had to rip away the turf and replace it with new sod in time for tonight’s game. I hope this doesn’t affect any key baseball games or injure any players.