Gov. Jay Nixon today applauded the Missouri House of Representatives for sustaining his veto of House Bill 253, which he vetoed in June. 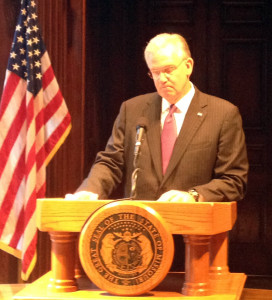 Nixon has been traveling the state for the past few months warning Missourians that the bill had an “unaffordable price tag” that “would have a devastating impact on public schools and other vital services.”

In an e-mailed statement, Nixon says, “Missourians are fiscally conservative folks who want good jobs in their communities and quality schools for their kids.  Over the past several months they have fought to defend those bedrock principles from being undermined by a reckless experiment — and today, they won. I applaud the legislators from both parties who came together to sustain my veto of this fiscally irresponsible bill, which would have defunded our schools and weakened our economy.  Today’s vote represents a defining moment for our state and a victory for all Missourians.”