You are here: Home / Sports / Rams keep Rodgers out of endzone, but lose 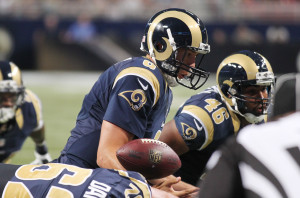 Green Bay Packers quarterback Aaron Rodgers did not lead a drive that ended in a touchdown, but Rodgers crafted several nice plays, picking apart the Rams defense by going 10 for 20 and 134 yards. Eddie Lacy, the former Alabama back, sliced through the Rams for 40 yards on eight carries in the Rams 19-7 loss, Saturday night in St. Louis.

Meanwhile, the Rams offense continued to show signs that they can move the ball. Sam Bradford put up some good number in his time on the field, going 8 of 12 for 156 yards. The one time the Rams really threatened to score, Bradford fumbled the snap at the one. Greg Zuerlein also missed a field goal attempt. While they moved the ball on first and second downs, their third down conversions were awful, going just 1 for 14.