A Kirksville man is in custody for murdering and dismembering a victim in Kirksville. His arrainment is slated for Jan. 16. 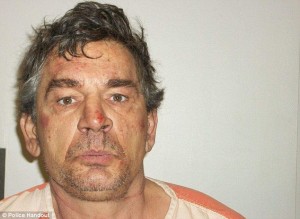 Adair County Prosecuting Attorney Matt Wilson would not say where Paul R. Potter, 49, is being held. Potter was arrested after allegedly murdering a man and then dismembering his victim’s body, throwing human arms at witnesses near his residence on Valley Forge Drive. Potter is also accused of setting fire to a nearby car and to a pair of apartments in an apparent attempt to divert attention from the crime.

Neighbors who witnessed the crime have spoken to the press about the scene they describe as horrific, and say it’s left them with nightmares. The victim’s name has not been released by authorities, but witnesses describe him as a kind, elderly man who lived next door to Potter. They also say Potter had befriended the man, even taking him meals on a daily basis.

They describe Potter himself as a talkative man with a big laugh who had a reputation for being kind and giving to others who lived in the apartment building.

Neighbor Jerry Stahl was outside Potter’s apartment when Potter started throwing the victim’s arms at witnesses.

“They hit me. I had blood on me and I’ve had nightmares since,” Stahl told The Kirksville Daily Express. “I couldn’t sleep Sunday. I still cry about it. It’s horrific.”

Martina Mudd, another neighbor, says she saw police officers running toward another apartment where Potter was throwing things. When she moved in closer, she saw what they were.

“That’s when I noticed the object he threw were arms,” Mudd said. “It was awful. It was like something out of a horror movie, only it was real.”

Neighbors say they never suspected Potter could be capable of such violent behavior.

“He would take him a plate of food nearly every day,” said neighbor Marlene Hammann.

Another neighbor says Potter would give and borrow cigarettes and had recently given $2 to a neighbor as a birthday gift.

“He was always doing nice things, he was very talkative, and he had a big laugh you could hear through all the apartments,” Mudd said. “No one would guess he’d do this, but anyone could snap. You never know about people.”