Now that the House of Representatives and the Senate has a GOP veto-proof majority, Governor Nixon says that does not change the way he’ll lead the state. 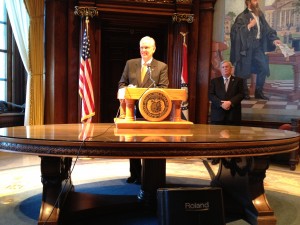 The House has used its power to override a veto by Governor Nixon … passing legislation to allow individuals and employers to opt out of insurance coverage for abortion, birth control and sterilization. But it had to get some votes from Democrats to do that. This year, with 110 Republican members, it will no longer have to do that.

Nixon says it will not change how he governs, and that he will work with both parties to get the people’s work done in Missouri.

He says in talking with people on the campaign trail, he knows people don’t care if you ride a donkey or an elephant to work, their concerns are about policies … not politics.

Nixon was asked by the press he’ll be campaigning for office during his second term as governor, but he wouldn’t say whether he’ll seek election to a higher office after this term is up.