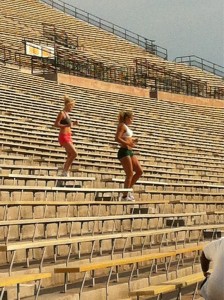 Kudos to KOMU-TV’s Eric Blumberg for quick thinking when he snapped this shot f two co-eds getting a cardio workout in by running the steps of Memorial Stadium.  The girls were asked to leave by a Mizzou football coach for fear they would be a distraction for the football players during their morning practice earlier this week.

Phil Pressey is blogging for CBS Sports, while the Mizzou basketball team is in Europe for a 10-day, five game tour. Pressey will not play after banging his knee last week in practice. Here’s a portion of his blog from day one.

“It’s funny being a basketball player and walking through an airport or a city. People think you are famous. There is a big group of you, you are all dressed in travel suits and you have tall guys like Alex (Oriakhi), Tony (Criswell) and Stef (Jankovic). We just try to explain to them that we are college students and basketball players from America and they don’t really understand. We could tell them we are Chris Paul or Allen Iverson and they might believe us. … But it has been a lot of fun so far and everyone here is really nice and interested in talking to you.”

Other coaches perceive John Calipari as the biggest cheater.

Mizzou at the pool. Gary Pinkel gave the players the afternoon off to escape the heat and chill out at the pool.