Fatalities on the water are down this year compared to last year, but the Water Patrol is still keeping its guard up as hot weather prompts more people to enjoy our lakes and rivers. Sgt. Jerry Callahan with the Highway Patrol’s Water Patrol Division says it’s time again for Operation Dry Dock, when officers will be out in force conducting sobriety stops and checking boaters’ safety equipment. 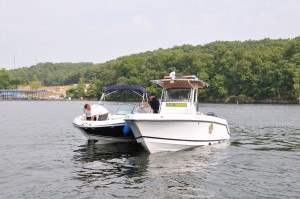 So far there have been five boating fatalities and six drownings in Missouri this year, which is down in comparison to last year. But the busiest time of the year is just ramping up, so that trend could shift rapidly, Callahan says.

He says contributing factors in fatal crashes on the water parallel those on the state’s highways … alcohol, inattention and speed are the main causes. Last year there were 15 boating fatalities and 36 drownings.

With water levels being lower than usual because of dry conditions, Callahan is also urging boaters to watch for stumps and other obstacles protruding through the water.

Operation Dry Dock happens this weekend, just as the waterways begin to get crowded near the July 4 holiday, typically the busiest day on Missouri’s lakes and rivers.