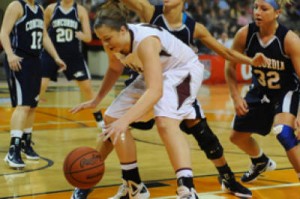 College of the Ozarks’ Morgan Smith, a native of Nixa, scored 30 points, 14 rebounds, five blocks, four assists, one steal and just one turnover in 37 minutes to help the Lady Bobcats to a 74-70 semifinal victory over second-ranked Concordia (Neb.).

The Lady Bobcats will make their fourth appearance in the national title game in school history when they battle Northwestern on Tuesday at 8 p.m. in a game televised live by CBS Sports Network. George Wilson, who has been the coach for all three of the Ozarks’ title game losses, and the Bobcats are hoping for better luck the fourth time around. His leading player, Smith, is determined to lead Ozarks to its first national championship victory.

“I feel pretty good that whatever my team needs from me I’m going to try to do,” Smith said. “The first half I was more on than I was the second half. In the second half I got a little off with my shot, but we put things together and we had a lot of different people contribute to that win.”