Many Missourians in mortgage trouble will get part of a $196 million settlement for our state. Higher Education cuts will be offset by about $40 million of it. 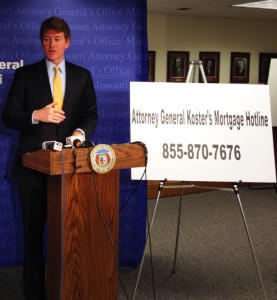 Attorney General Chris Koster joined in a nationwide suit against the five biggest mortgage servicers, which agreed to a multi-billion dollar settlement to address allegations of foreclosure abuses, unfair mortgage servicing practices, and fraud. Borrowers who lost their homes or are behind on their payments might be eligible for help and reimbursement through the companies involved in the suit: Bank of America, Citigroup, JPMorgan Chase, Wells Fargo, and Ally Financial.

Koster says there are about ten smaller companies he’s prepared to go after, but combining the five largest servicers into the top tier made sense because of the complexity of the lawsuit and negotiations involving 49 other states. (Oklahoma has not yet signed onto the suit. Koster believes it will.)

His office is embarking a big push to get people on board with the program since it operates on a first come, first served basis.

“This $196 million is not in a bucket here in Missouri,” Koster says. “If we don’t utilize it, California, Illinois and New York will take this money and spend it in their own states.”

“This settlement provides much needed relief to a broad spectrum of Missourians: those who have already been foreclosed on, those who are current on their payments but underwater on their mortgages, and those who are struggling with their current payments but could make more reasonable ones,” Koster says. “Through millions of dollars in principal reductions, this settlement makes it easier for Missourians to stay in their homes.”

Missouri consumers will be eligible to receive the following benefits under the settlement:

The Attorneys General also negotiated direct payments to the states.  Attorneys General have the discretion on how these funds are used.  Koster said that because the state is facing severe budget shortages, he will direct more than $40 million to the state’s general revenue fund to be used in the state budget.  Gov. Jay Nixon has announced he will use the $40 million to restore funding for the state’s public colleges and universities.

The five settling financial institutions also agreed to make changes to their processes to ensure more people are able to stay in their homes. Among the new mandated servicing and foreclosure practices, the settlement requires lenders:

The settlement does not rule out the possibility of criminal prosecutions, including the indictment Koster announced earlier this week against DOCX, LLC and its former president, Lorraine Brown.  Nor does it prevent homeowners or investors from pursuing individual, institutional or class action civil cases against the five servicers.

The joint state-federal settlement is the result of a massive civil law enforcement investigation by state attorneys general and state banking regulators across the country, and nearly a dozen federal agencies.

The final agreement, through a consent judgment, will be filed in U.S. District Court in Washington, D.C., and will have the authority of a court order.

A consumer hotline has been set up for consumers to get more information about the settlement.  The hotline number is 855-870-7676.

AUDIO: Koster talks about who qualifies, how they can get money and help (4:58)