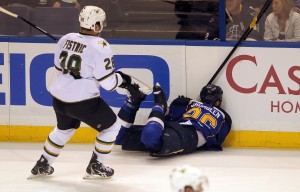 Andrew Raycroft stopped all 33 shots he faced and Francis Wathier and Vernon Fiddler each had a goal and an assist as the Dallas Stars cruised to a 4-0 win against the St. Louis Blues at the Scottrade Center on Saturday.

Jake Dowell and Tomas Vincour also scored, and Trevor Daley added a pair of assists for the Stars, who ended their preseason winning six of seven games.

Jaroslav Halak stopped 20 shots for the Blues, who were shut out for the second time at home this preseason. St. Louis finished with five wins in eight games.