The FBI and Dunklin County Sheriff’s office continues to look into clues into a missing 3-year-old Senath girl, who disappeared while on her bicycle Saturday afternoon.  Breeann Rodriguez is described as an Hispanic female approximately 34 inches tall and weighing 30 pounds. 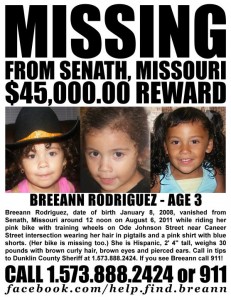 Witnesses say she disappeared from in front of her house on in Senath at noon Saturday.  FBI spokeswoman Rebecca Wu tells Missourinet affiliate KZIM KSIM they are now focusing on a construction van that was seen in the area a few days prior.

Authorities say they believe it’s an older model panel van with no windows and a ladder on the back for roof access. But they don’t have much to go on in that search. They don’t know the make, model, or license plate of the van.

Rodriguez was last seen wearing a pink shirt, pink pants, and riding a pink bicycle with training wheels near the intersection of Ode Johnson and Caneer Streets.

Senath Police Chief Omar Karnes says the mother was inside making lunch and the father was at a local auction at the time. Her 5-year-old brother came inside to get some water, came back 20 minutes later and his sister and her bike were gone, he says.