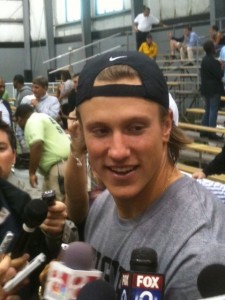 It was NFL Pro Day at Missouri and the big draw of course was quarterback Blaine Gabbert. On hand among the 125 NFL personnel were six NFL coaches including four who have a pick within the top eight of the draft. Gabbert answered any and all questions about his accuracy.

Watch some of Gabbert’s workout.

If anyone questioned his accuracy, that can be put to rest. Of his 50 passes, he missed on maybe two. They were on those deep route passes, but everything else was right there and the ball was zipping.

The other thing that Gabbert said the coaches wanted to see was him working out of the snap from under center and taking three, five and seven step drops. His footwork was great.