You are here: Home / Sports / Halak beats his former team 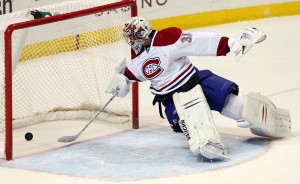 Montreal Canadiens goaltender Carey Price can't stop the puck as it rolls past the red line for a goal off the stick of St. Louis Blues David Backes. UPI/Bill Greenblatt

In his first game against his former team, St. Louis Blues goalie Jaroslav Halak made 27 saves to help give the Blues a 4-1 win over the Montreal Canadiens 4-1 Thursday night.