You are here: Home / Sports / Missouri runs over Miami-Ohio (AUDIO) 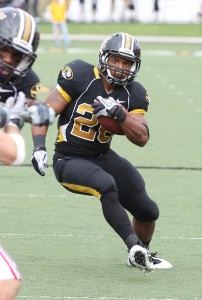 Missouri Tigers De'Vion Moore runs through the Miami of Ohio Redhawks defense for a touchdown in the second quarter at Faurot Field in Columbia, Missouri on September 25, 2010. UPI/Bill Greenblatt

The Redhawks of Miami-Ohio wanted to shut down the Tigers passing game, so Missouri went to running the football and ranked up 236 yards on the ground with five rushing touchdowns as Missouri finishes their non-conference schedule 4-0 with a 51-13 win over Miami.

Miami was rushing two early in the game and the offensive line was creating big holes for the backs.  Kendial Lawrence (63 yards, 1 TD) DeVion Moore (39 yards, 1 TD), and Henry Josey (55 yards, 1 TD) all led a big first half attack as the Tigers opened with a 28-3 halftime lead.

The Tigers scored just eight seconds into the game, when Miami fumbled the ball at the 22 on a screen pass.  Carl Gettis scooped up the loose ball at the 19 yard line and ran it in for a touchdown.

With not much open downfield, Blaine Gabbert was content with handing off, throwing the ball just 21 times out of 61 offensive plays.  The defense continues to creat havoc for opposing teams.  Missouri came up with two fumble recoveries and an interception.

On Zac Dysert’s first pass of the game, Andrew Gachkar forced a fumble at the Miami’s 22 and Carl Gettis picked up the loose ball and took it 19 yards for a quick Missouri touchdown, just 8 seconds into the game.   Miami only had two fumbles in their first two games.  In the first five minutes, the Redhawks fumbled the ball three times, recovering two of those on their second drive of the game.

The running game started out well.  De’Vion Moore had a 27 yard gain, followed by Kendial Lawrence’s first collegiate touchdown on a 39 yard run.  Mizzou goes up 14-0 scoring on a five play, 94 yard drive.

On the Tigers’ second possession, the Tigers drove 71 yards on 8 plays, capping it off with a 28 yard touchdown run from Henry Josey.  The Tigers rushed the ball eight times while attempting just four passes in the first quarter.  Clearly developing a run attack is a priority.  Mizzou totaled 129 yards net rushing in the first quarter.

Michael Sam intercepted Dysert’s pass after the quarterback was hit on a fierce pass rush on a third and five play deep inside Mizzou territory.  Sam appeared to have had a 90 yard return for a touchdown, but Jacquies Smith got called for a block in the back which was questionable.  Mizzou took over at the Miami 38.

De’Vion Moore followed with a seven yard touchdown as the Tigers needed just four plays to finish off a 38 yard drive.

With 3:01 to play, Mizzou drove down for their final possession of the half and failed to convert on third down at Miami’s 30, but the Redhawks gave the Tigers a 1st and five at their own 10, with a late hit penalty and offsides, but Gabbert was picked off in the end zone as the Tigers were unable to capitalize on an opportunity to add to their 25 point lead.

Three plays after the kickoff, Mizzou scored on a 38 yard touchdown pass from Gabbert to Wes Kemp.  The PAT was wide making the score 34-3, just 1:04 into the third quarter.  The first PAT miss since 2005 snapping a streak of 255 straight PATs.

The Tigers took over on their second possession of the third quarter and scored on a 50 yard field goal from Grant Ressel, his longest of his career.

Missouri recovered their second fumble of the game, setting up at Miami’s 19 yard line.  Gabbert scored on a one yard sneak putting the Tigers up 44-3.

After another Miami field goal, the Tigers came back down the field with James Franklin at QB and mostly reserves on offense to drive the field and score another rushing touchdown, this one from freshman Marcus Murphy to make the score 51-6.

Missouri was content with running out the clock.   With a first down at Miami’s 11, backup QB James Franklin ran the ball four times on sneaks.