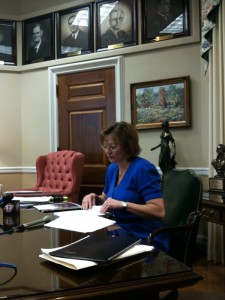 An audit of the State Transportation’s road and bridge funding plan finds improvements are needed in the development of long-range transportation needs and funding estimates.

State Auditor Susan Montee says MoDOT does a good job of developing short-term projects, but the ball is dropped when focusing on transportation needs down the road.

“We really have no problem with the way that they are funding the projects that are actually in construction,” said Montee during a meeting with reporters in her State Capitol Office. “The problem is that they have a long-range plan in place and then they have now come up with what they’re calling the Conversation, that is a more updated version that they are talking to the public about that includes a lot of projects, and in the project of the Conversation and in the long-range plan the projections are not reliable.”

The projections are not reliable because funding estimates were arrived at without inflation being factored in.

“MoDOT says that they’re not taking it into account in these documents because these are just generalized estimates,” said Montee. “The problem is they are holding up this document and saying, ‘These are our estimates. This is what our funding shortfall is, and it doesn’t take inflation into account.’ So, we think it definitely needs to.”

Montee says MoDOT has a response to that concern.

“When we asked them about it they said, ‘Well, the numbers are already high and if we took inflation into account it would be much higher.’ Well, yes, but it would be more realistic,” said Montee. “So, yes, we do have real concerns with that.”

Montee adds that while MoDOT claims its current priority is on taking care of the existing system it is emphasizing expansion, which she says is inconsistent with stated priorities.