You are here: Home / Sports / Bills hold on for win over Chiefs 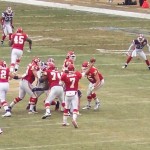 Matt Cassell passed for 224 yards but was intercepted 4 times as the Buffalo Bills downed the Kansas City Chiefs 16-10 Sunday afternoon at Arrowhead Stadium in Kansas City.

The Bills got on the board first Terrell Owens grabbed a 9 yard touchdown pass from Ryan Fitzpatrick to cap an 8 play, 92 yard drive. Rian Lindell booted the extra point and Buffalo led 7-0. That was the score after the 1st quarter.

Kansas City hit the score sheet in the 2nd quarter when Ryan Succop kicked it through the uprights from 21 yards out to make the score 7-3.

Buffalo got it back with under 2 minutes to play in the half as Lindell notched a field goal from 41 yards away. The half ended with the Bills up 10-3.

The Bills extended their lead to 13-3 in the 3rd quarter as Lindell connected on a 24 yard field goal attempt.

But the Chiefs weren’t done and they scored a major with just 17 ticks of the clock remaining in the 3rd quarter. Jamaal Charles bolted 76 yards from the line of scrimmage for 6. Succop’s PAT narrowed the Bills’ lead to 13-10.

A Lindell 36 yard field with a little under 3 and a half minutes to go in the 4th quarter gave Buffalo a 16-10 lead. And that would round out the scoring for the afternoon. 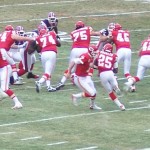 KC quarterback Matt Cassell completed 26 of 43 passes for his 224 yards. Jamaal Charles ran for 143 yards in 20 rushes, including the long TD run, which made up the vast majority of the 152 net yards the Chiefs picked up on the ground.

The Chiefs (3-10) return to action next Sunday when they host the Cleveland Browns.