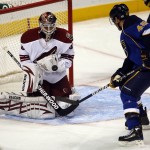 Ilya Bryzgalov and the Phoenix Coyotes took care of the St. Louis Blues for their sixth victory in eight games. The Coyotes goalie made 32 saves for his NHL-leading third shutout of the season, and Daniel Winnik and Taylor Pyatt scored in Phoenix’s 2-0 victory Thursday night at the Scott.

The near bankrupt Coyotes are 8-4-0, off to their best 12-game start since going 9-1-2 in 2000-01. Bryzgalov improved to 7-3-0. Bryzgalov stopped 11 shots in the third period and made four big late saves after the Blues pulled goalie Ty Conklin for an extra attacker.

St. Louis (5-5-1) lost for the third time in five games. The Blues have not scored on their last 20 power-play chances and wasted a 25-second 5-on-3 advantage in the first period.