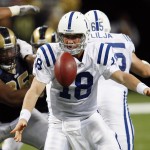 Indianapolis Colts QB Peyton Manning was 23 of 34 for 235 yards and three touchdowns to help lead his team to a 42-6 win over the St. Louis Rams, dropping St. Louis to 0-7 on this season. The loss is also the Rams 17th straight regular season loss.

The Rams managed just two field goals from Josh Brown. One came with 5:26 in the first quarter to cut the score to 7-3 after Manning found Reggie Wayne on a six yard TD pass. The other field goal came late in the third quarter to make it a 21-6 game.

Indy put the game out of reach when Jacob Lacey picked off a pass and went 35 yards for a touchdown. Marc Bulger was picked off twice throwing for just 140 yards while going 14 of 26.