As a Revolutionary War Patriot is honored at the Capitol, his descendents reflect upon their heritage. 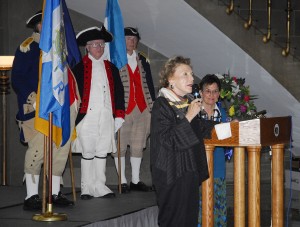 Elizabeth Gentry Sayad, his great-great-great granddaughter, says Richard Gentry fought in the battlefield at Yorktown in 1781, where Lord Cornwallis surrendered.

Gentry’s epitaph reads “present at the capture of Cornwallis.” While most remember that Cornwallis surrendered, Sayad says her ancestors called it a capture. She says he wasn’t always buried at the Jefferson Barracks National Cemetery in St. Louis, where he is now. Her father got permission to move him out of a run-down family plot in Kentucky in 1959.

Sayad says keeping such history alive like this helps everyone remember that we’re all stakeholders in America, and to be aware of that keeps us from being lost.

Gentry’s name has been added to a historic marker in the Capitol. Sayad says ceremonies such as this one serve as important reminders.

Gentry’s 19 children had quite an impact on Missouri history, eight of them settled here, including serving in the first legislature, the Indian wars, founding Boone County and the city of Columbia and more.

Gentry County, Mo., is named for Gentry’s son, Gen. Richard Gentry, also a military hero. Amos Harris is a descendant of the senior Gentry’s first wife, Jane Harris, who was the great granddaughter of William Claibourn, Virginia’s first Colonial Secretary. Claibourn came to Jamestown, Va., in the 1600s after being appointed by King James.

The dedication and ceremony at the Capitol was headed up by the Webster Groves chapter of the Daughters of the American Revolution.