The Brewers sent four prospects to the Cleveland Indians in return for last year’s American League Cy Young Award winner C.C. Sabathia who won his Milwaukee debut.  The Cubs followed that up by completing a six player deal yesterday to get Rich Harden from the A’s.  As far as the Cardinals?  They start Mark Mulder tonight.

Don’t get me wrong, the Cardinals have done an amazing job with keeping this team together, but do they have the horses to keep pace with Milwaukee and catch Chicago in the 2 nd half? 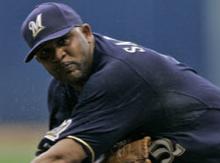 I look at this two ways.  The first, if the Cubs didn’t make this move, they wouldn’t have been able to hold off Milwaukee.  I’ve been saying for the past month, watch out for the Brewers who were two games under .500 on May 29 th and 7 games out of first place.  Since then, the Brewers have gone 24-12.

The Cubs have somehow managed to hang on in first place despite missing two starts from Carlos Zambrano and two stints on the DL from their leadoff hitter Alfonso Soriano who won’t be back until late July.

At the same time the Cardinals have had their share of injuries and games missed from their pitching staff and have stayed right in the mix all season long.  With Mark Mulder starting on Wednesday and Adam Wainwright beginning a throwing program, the Cardinals will make additions to their starting rotation without needing to trade away young prospects. 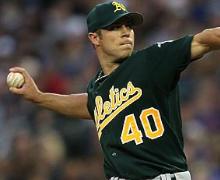 So one argument can be made to not overreact to Milwaukee and Chicago’s move and with two more arms coming into the rotation, it could allow some relief on an overworked bullpen and may be the fix the Cardinals need in the second half.

However, the other side of the story is Mulder is unproven this season.  He was shaky in rehab starts with Springfield and Memphis and didn’t look particulary sharp in his second of two relief appearances.  There has to be concern that it may take Mulder some time to get going if he ever gets going at all.

Second, there is no timetable for when Wainwright can return.  He will only start light throwing and my guess would be it’s going to be at least two more weeks before he is ready.  This may all be too late.

The Cardinals may be rolling the dice hoping these arms come back soon and can help, but it’s possible by the middle of the August the pitching staff could have Wainwright, Looper, Lohse, Mulder, and Pineiro.  They could move Wellemeyer back to the pen who hasn’t been the same since his shoulder strain, Carpenter, Villone, Isringhausen, Perez, and Franklin, plus a 12 th arm.  On paper, that could look good.