You are here: Home / Archives for Wright County Courthouse

A small southern Missouri town whose only grocery store was struck by a May tornado has good news. 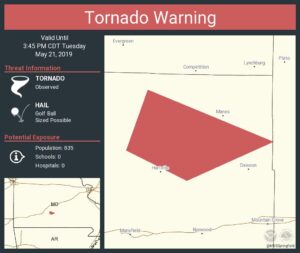 Hartville’s Town and Country Supermarket re-opened on Thursday, almost five months after taking a direct hit from the May 21 tornado. The storm caused the grocery store’s ceiling to cave in and windows to blow out.

Hartville is about an hour east of Springfield. The National Weather Service (NWS) in Springfield issued eight tornado warnings that day.

State Rep. Hannah Kelly, R-Mountain Grove, whose district covers Wright and Webster counties, says the grocery store’s re-opening is crucial to her constituents in Hartville, especially elderly residents and those without transportation. Kelly tells Missourinet residents have had to drive 45 minutes to Lebanon or 40 minutes to Mountain Grove to get to another grocery store.

Hartville has about 600 residents. There were no fatalities nor serious injuries in the May tornado.

Kelly has credited the Town and Country Supermarket’s manager for saving lives during the tornado, by huddling everyone inside the freezer. Manager Josh Dugger told Missourinet Springfield television partner KOLR-10 in May that 25 employees and customers went inside the produce cooler to wait out the storm. He said the storm “popped all our ears.”

The May 21st tornado also caused damage outside the Wright County Courthouse, where people huddled inside the basement during the storm.