You are here: Home / Archives for Wrestling 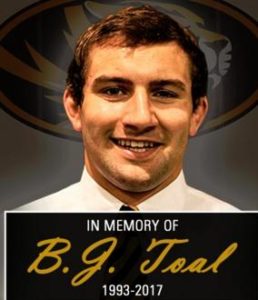 Former Mizzou wrestler B.J. Toal died on Monday after being involved in on April 1 incident in downtown Columbia, Mo.

Toal was a wrestling coach at Columbia’s Hickman High School.

According to KRCG-TV, Toal was involved in a confrontation with another individual shortly after 1 a.m.  As Columbia police approached, Toal ran from the scene but was found in an alley with head injuries.

Mizzou Wrestling and Mizzou Athletics is saddened to hear of the passing of former wrestler B.J. Toal, who passed away yesterday after being involved in an April 1 accident. With his older brother Zach being on the team as well, the Toal family has been a part of the TigerStyle family for a long time and forever will be. Our thoughts and prayers are with B.J.’s family and friends during this time of grief.

“I remember meeting B.J. when he was in 8th grade. I joked with his older brother Zach that he was stronger than him and I knew I would recruit him even though he wasn’t in high school yet. He came in with a great recruiting class, and we had high expectations, but unfortunately injuries kept him from reaching those expectations. The great thing about B.J. was he continued to share his passion for wrestling through coaching and other avenues. He impacted so many other people’s lives, just like he impacted ours. The TigerStyle family is going through a tough time right now, my biggest prayers are with his family helping them get through this.” 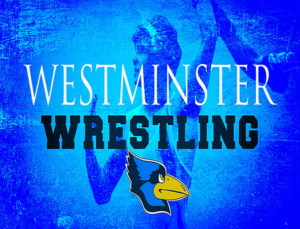 “Pin to win” could well be the Blue Jays new battle cry when Westminster College introduces the first NCAA Division III collegiate women’s and men’s wrestling programs in Missouri next year, it was Thursday afternoon in Fulton.

The wrestling teams were announced by college President Dr. Benjamin Ola. Akande, Athletic Director Tracey Braden, and Coaches Tony and Mike Eierman. “We are excited to be adding NCAA Division III wrestling to our outstanding athletics program here at Westminster College,” Akande said. “And, we’re equally proud of the fact our Lady Blue Jay’s wrestling team will be only one of 10 women’s wrestling teams at private colleges and universities in the country.”

Akande said wrestling is a growing collegiate sport, especially in the Midwest. In Missouri alone, he said, there are 6,800 high school male wrestlers, “but no Division III collegiate wrestling programs in the state, where they can continue to pursue their passion for wrestling.”

Women’s wrestling also is taking off, with more than 13,400 high school female wrestlers competing at state championships in six states, Braden said, adding that there are 31 collegiate women’s wrestling teams on large and small campuses across the U.S.

The Eierman brothers will provide Olympic quality coaching for Westminster wrestlers. Both coaches are well known throughout the Midwest for their competitive wrestling program based in Fulton, and especially for training and coaching wrestling champions, including Olympic Bronze medalist J’den Cox.

Listen to the press conference

Before coming to Mid-Missouri in 2003, Mike was a resident athlete for more than three years at the Olympic Training Center in Colorado, and over his 30-year involvement with the sport, he has trained in many other countries with some of the world’s best wrestlers.

END_OF_DOCUMENT_TOKEN_TO_BE_REPLACED 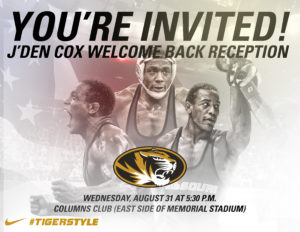 Mizzou Athletics would like to invite the public to a welcome back reception for 2016 Olympic Bronze Medalist J’den Cox (Columbia, Mo.) on Wednesday, August 31. The reception will begin at 5:30 p.m. CT and will take place at the Columns Club on the east side of Memorial Stadium.

Doors to the reception will open at 5:00 p.m. CT, where fans will enter at the south tower on the east side of Memorial Stadium and proceed up the elevators. Parking will be available around the football stadium in lots J, K and O. Refreshments will be available for the event.

Mizzou Wrestling Head Coach Brian Smith and Mizzou Athletics Executive Associate AD Sarah Reesman will kick off the reception with remarks, followed by a Q&A session with Cox and Gary Link about Cox’s experience in Rio. During the Q&A session, the public will have the opportunity to ask questions directed towards Cox. Following the reception, Cox will sign autographs and take pictures with the public. Fans are permitted to one autograph item. Special edition autograph cards will be available at the event.

Junior J’den Cox (Columbia, Mo.) became the second-ever two-time NCAA National Champion in Mizzou Wrestling history with a 4-2 win over Morgan McIntosh (Penn State) at Madison Square Garden in New York City, N.Y. on Saturday. Cox joined Ben Askren (2006, 2007) as the only Mizzou grapplers to finish a season atop of their weight class twice during their career.

Cox and McIntosh, two of arguably the most technical wrestlers in the nation, finished the first period scoreless. Cox nearly had a takedown near the end of the period, but McIntosh escaped Cox’s grasp and got out of bounds for a restart. Cox and McIntosh traded escape points to start the second and third periods, respectively. McIntosh escaped with under a minute left in the match, tying the score, 1-1. At the time of the escape, Cox had just under a minute of riding time. With the buzzer nearing, Cox got both of McIntosh’s legs to secure the takedown and the victory, 4-2 (point for riding time).

Mizzou finished the tournament sixth overall in the team standings.

For the second time in three years, junior 197-pounder J’den Cox will wrestle for the 197-pound National Championship after securing a fall over Brett Pfarr (Minnesota)  in the semifinal. No. 2-seeded Cox will face top-seeded Morgan McIntosh (Penn State) tomorrow at 7 p.m. CT on ESPN. 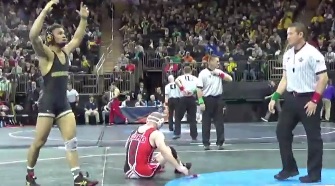 Five Mizzou wrestlers advanced to the second round with victories at the 2016 NCAA Wrestling Championships at Madison Square Garden. Mizzou is currently tied for fifth place with 10.0 team points.

Check back for a recap later.

Team Standings after Day One 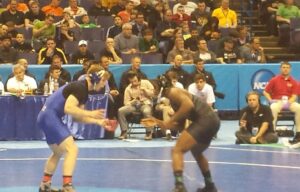 Seven Mizzou wrestling were given top-16 seeds as the brackets for the 2016 NCAA Wrestling Championships were announced by the NCAA. Nine wrestlers from Mizzou will compete in the National Tournament, held March 17-19 in New York City at Madison Square Garden.

Junior 197-pounder J’den Cox (Columbia, Mo.) was the highest seeded Tiger in the field, coming in at No. 2 in the 197 pound weight class. Coming off his third consecutive Mid-American Conference title, Cox (28-1) will wrestle Rutgers’ Hayden Hrymack (17-14) in the first round.

The tournament will kick off from Madison Square Garden at 11 a.m. CT on Thursday, March 17. Both sessions (first round and consolation round) on Thursday will be broadcasted on ESPN U and ESPN3.  Saturday’s morning session (medal round) will start at 10 a.m. CT and will be shown on ESPN U and ESPN3. Saturday’s finals round will begin at 7 p.m. CT and will be televised on ESPN. 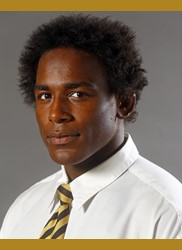 Cox is ranked No. 2 in the nation by the NCAA Coaches Panel Rankings.

Cox and the Tigers look for their fourth straight MAC Tournament title and fifth conference title overall at the 2016 MAC Championships, held March 5-6 in Ypsilanti, MI.