You are here: Home / Archives for World Cup 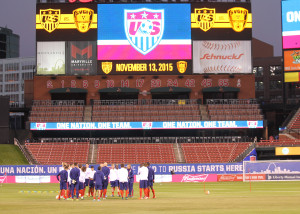 The U.S. Men’s National Soccer team gather at midfield before a practice under the lights at Busch Stadium in St. Louis on Novembr 12, 2015. The U.S. will play St. Vincent And The Grenadines, in a FIFA World Cup Qualifier match on November 13, 2015. Photo by Bill Greenblatt/UPI

The United States men’s national soccer team will begin their path to the FIFA World Cup with a qualifying match tonight against St. Vincent and the Grenadines at Busch Stadium in St. Louis.

Since the 1998 World Cup Qualifying cycle, the MNT’s path to one of CONCACAF’s berths at the FIFA World Cup has been a long and winding road. Nowadays, in order for the MNT to qualify for the World Cup, it’ll have to go through at least 16 matches against CONCACAF opponents over the course of nearly two years.

END_OF_DOCUMENT_TOKEN_TO_BE_REPLACED

The U.S. faces North Korea today in their first game of the World Cup in Germany. When the match begins, Becky Sauerbrunn (click her name for her bio and interview), a 27 year old defender from St. Louis will be on the pitch. For a time, it looked like she wouldn’t make this roster, but an injury gave her an opportunity to earn her spot and she took full advantage of it.