You are here: Home / Archives for WNBA

In July, the day Jonathan Irons had been waiting for finally arrived. He walked out of the Jefferson City Correctional Center as a free man. Waiting for him was a team of supporters, including the woman he now calls his wife. 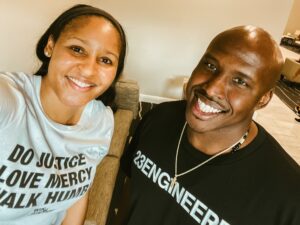 WNBA star Maya Moore and Irons announced Wednesday that they tied the knot. Moore, 31, grew up in central Missouri’s Jefferson City. Irons, 40, is from the St. Louis suburb of Wentzville.

The newlyweds revealed their news to Robin Roberts on “Good Morning America”.

“We wanted to announce today that we are super-excited to continue the work that we’ve been doing together, but doing it as a married couple,” Moore said. “We got married a couple months ago and we’re excited to just continue this new chapter of life together.”

Moore and Irons became friends many years ago through her family.

“Over the last 13 years we … just entered into this huge battle to get him home, and just over time it was pretty clear what the Lord was doing in our hearts, and now we’re sitting here today, starting a whole new chapter together,” she said.

Moore walked away from the game about two years ago to put the full courtroom press on to get Irons released. She was in the prime of her career playing for the Minnesota Lynx.

Irons had been locked up for more than 20 years for a violent O’Fallon home burglary that he maintains he did not commit. His attorneys, a team from the powerful law firm of Rosenblum Schwartz & Fry in St. Louis, argued there was no physical evidence linking Irons to the crime and other misconduct occurred by the police investigator in the case. Their work paid off – his conviction was overturned in March.

Irons said he asked Moore to marry him a few years ago, but told her to hold off on answering until he was free.

“Because in my mind, I didn’t know if I’d be home,” he said. “And she’s such an amazing, beautiful person, I could never trap her or not let her fulfill her dreams of being a wife and being a mother one day.”

Hours after his release from the maximum-security prison on “No More Victims Road”, Irons popped the question – again. Moore quickly accepted.

Moore is a two-time Olympic gold medalist, two-time NCAA champion and four-time WNBA titlist. She was WNBA Rookie of the Year in 2011 and league MVP in 2014.

As for her basketball career, she says she does not have a game plan for that yet.

“I’m hoping sometime in the spring we’ll be able to have a next step moving forward, but right now I am trying to really just breathe from this long, long battle, and enjoy and rest,” she said. “There’s a lot of unknowns for a lot of us right now, so I’m still in that camp.”

Moore has told reporters in earlier interviews that a documentary is in the works to show their pursuit of shining a light on wrongful convictions.

WNBA star Maya Moore has scored a win in the courtroom by helping to get a St. Louis area man freed from prison this month. The Missouri Western District Court of Appeals granted the release of Johnathan Irons, who was locked up for more than 20 years for a violent O’Fallon home burglary he insists he did not do. Several gun shots were fired during the 1997 break-in, leaving the homeowner with a serious head injury.

Moore, who grew up in Jefferson City and is a longtime friend of Irons, stepped away from the game in the prime of her career to help Irons get out of prison. Outside the Jefferson City Correctional Center, she fell to her knees as she watched Irons take his first steps as a free man again.

During a conference call with reporters from across the globe, she said a huge weight has been lifted off her family’s shoulders.

“This is similar to a championship in the feeling of like the next day exhaustion of like ‘We just went to the mountain top and now oh yeah – our bodies are exhausted,’” said Moore.

For the past 18 months, she has been helping her extended family put on a full court press to get Irons released. Moore’s godfather, Reginald Williams, made a pivotal discovery when he uncovered a document within the O’Fallon Police Department’s evidence files – an unidentified fingerprint from the crime scene. That piece of evidence turned up several years after the original court trial concluded.

The revelation led to an appeal last October in which his lawyers made the case that no physical evidence connects Irons to the crime. They also argued that police mishandled the original case in several ways.

Moore says she never truly felt like Irons would not have his conviction overturned.

“There’s something about truth that just makes you believe it’s going to happen – when you have the facts right in front of you,” says Moore. “I’ve heard Jonathan say this, like he just had to keep believing ‘If we get the truth in front of the right people who want to do the right thing, they’ll do it.’ When I decided to use my platform and my voice, I was just shining a light with the resources that I had on the facts that were already there, trying to put it into the hands of people who could do something about it.”

Irons was represented by a powerful group of four attorneys from the high-profile law firm of Rosenblum Schwartz & Fry in St. Louis.

“This is an issue of long-term dehumanization that has been expressed intentionally through systems in our country. And so because I think we are beginning to talk more about the root of systemic racism, which is centered on dehumanizing people, we can start to weed out the dehumanizing practices through these systems. Changing systems doesn’t make sense until you get to the heart behind that system.”

Moore, a two-time Olympic gold medalist, two-time NCAA champion and four-time WNBA titlist, launched a non-profit inspired by Irons. Win With Justice educates people about prosecutorial misconduct and aims to redefine what a win is in the criminal justice system.

Missouri man in prison for violent 1997 burglary could be a free man soon
https://wp.me/p16gMv-whE

Former Southwest Missouri State standout Jackie Stiles has won the WNBA’s Rookie of the Year award. The Portland Fire shooting guard averaged 14.9 points per game this season for the 11-21 Fire. She started att 32 games for Portland and averaged a team-high 32 minutes per game. Stiles received 32 of the 60 votes for the award. Seattle’s Lauren Jackson was second in the balloting with 20 votes.

Former Southwest Missouri State standout Jackie Stiles wrapped up her rookie season last night in the WNBA with six points as her Portland Fire squad lost to Los Angeles 67-58. Stiles hit on only 1-9 shots from the field as Portland lost for the 10th straight time to end the season. Stiles wraps up her rookie season in the WNBA averaging 15-points a game. Portland struggled as a team however, finishing 11-21.

Formr Southwest Missouri State star Jackie Stiles scored 14 points on Tuesday to help the Portland Fire defeat the New York Liberty 86-68 in WNBA action. Stiles hit on 5 of 10 shots from the field, including 2-4 from behind the arc. With the win, Portland improves to 11-11 on the season.

Jackie Stiles scored a game-high 21 points, but it wasn’t enough as the Portland Fire lost to Detroit 80-77 in overtime in WNBA action on Sunday. The former SMS star hit on 7 of 18 shots from the field, inclduing 3 of 6 from behind the arc. Portland falls to 10-11 on the season with the loss.

Former Southwest Missouri State standout Jackie Stiles made her WNBA All-Star Game debut last night, contributing four points to the Western Conference’s 80-72 win over the east. Stiles didn’t have one of her best games lt night, she scored all her points from the foul line and did not hit a shot from the field. Los Angeles Sparks standout Lisa Leslie was named the game’s MVP with 20 points and nine rebounds.

The WNBA All-Star Game is tonight in Orlando as East takes on the West. Former Southwest Missouri State standout Jackie Stiles will suit up for the Western Conference as the only representative of the Portland Fire. Stiles is enjoying a fine rookie season, averaging 16 points a game. She will come off the bench for the West. Stiles just missed being voted as a starter for the game, finishing third in the fans’ voting at guard.

Jackie Stiles has earned yet another honor. The Southwest Missouri State product has been named as a reserve for the WNBA’s Western Conference All-Star team. Stiles just missed being voted as a starter for the team as she finished third amongst guards in the fan voting. The Portland Fire rookie is averaging 16 points a game this season after being the fourth overall selection in the draft. Stiles and the Fire host Houston tonight.