You are here: Home / Archives for witness and victim tampering

Legislation that increases penalties for witness and victim tampering will go to the Missouri House floor in Jefferson City on Monday, after being approved by the Judiciary Committee on a 17-0 vote this week. 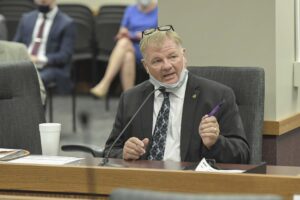 The prosecutor in western Missouri’s Johnson County traveled from Warrensburg to Jefferson City to testify for the bill, saying that witness and victim tampering happens across the state.

“And we find that those who commit violent offenses are not afraid to use intimidation, harassment, threats and more violence to escape justice for what they do,” Johnson County Prosecutor Robert Russell says.

Russell, who serves as treasurer for the Missouri Association of Prosecuting Attorneys, says witness and victim tampering happen frequently in homicide and domestic violence cases.

“Victim tampering is a problem not unique to the cities of Missouri. It happens everywhere, even in little Johnson County,” Russell testifies.

The measure is a key part of Governor Mike Parson’s special session call on violent crime.

The Missouri Police Chiefs Association and the Missouri Sheriff’s Association also testified for the bill this week. State Rep. Barry Hovis, R-Cape Girardeau, the bill sponsor, served as a law enforcement officer for more than 30 years.

The Hovis bill, which is House bill 2, specifies that the offense of tampering with a witness or a victim is a class C felony, if the original charge is a class A felony or an unclassified felony. It’s currently a class D felony, under state law.

Representative Hovis tells Judiciary Committee members that the bill was unanimously approved in committee this spring. He says the Legislature would have approved it, but that the COVID-19 pandemic impacted the General Assembly’s time frame.

Another piece of legislation that goes to the Missouri House on Monday involves witness protection.

The Judiciary Committee voted 17-0 this week for witness protection legislation from State Rep. Jonathan Patterson, R-Lee’s Summit. It would create a pretrial witness protection services fund, to be administered by the state Department of Public Safety (DPS) to law enforcement agencies.

The money would be used to provide security to witnesses, potential witnesses and their immediate families in criminal proceedings or investigations.