You are here: Home / Archives for Wise Health Solutions

The Missouri House Speaker says there are still many questions and concerns about the state’s medical marijuana program. 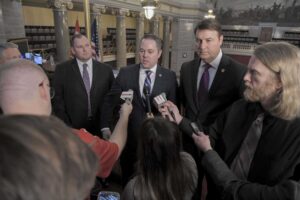 During a briefing Thursday with Capitol reporters in Jefferson City, House Speaker Elijah Haahr, R-Springfield, says he expects the House Special Committee on Government Oversight to hold another hearing next week.

“I think the big thing that we sort of figured out from the (Wednesday) hearing is there’s a lot of questions that remain unanswered,” Haahr says.

The oversight committee has held two hearings on the issue, and has been focusing on how licenses have been approved. An attorney for the Missouri Department of Health and Senior Services (DHSS) testified this week that they expect about 600 lawsuits over the issue.

“We (state lawmakers) just need to figure out when decisions were made, who was making those and try to make sure that the process was followed to the best of the department’s ability,” says Haahr.

House Special Committee on Government Oversight Chairman Rep. Robert Ross, R-Yukon, tells Missourinet there will be another hearing next week in Jefferson City, likely on Wednesday.

The oversight committee has questions about DHSS’ decision to hire a third-party scoring company whose partners are already active in the industry.

Lawmakers in both parties want to hear testimony from the Office of Administration (OA), which awarded the contract to Wise Health Solutions.

A special Missouri House committee is ramping up its scrutiny of the state’s new medical marijuana program—focusing on how licenses have been approved.

The program director and the state health department decided to go with an independent group to screen applicants and now those selections are being challenged in a state administrative court. A health department attorney told lawmakers they expect as many as 600 lawsuits over the issue.

The panel focused on the department’s choice to hire a third-party scoring company whose partners are already active in the industry.

The House Committee on Government Oversight member Jered Taylor, R-Republic, asked medical marijuana program director Lyndall Fraker if he knew that partners in the chosen scoring company had in the past been hired for training by potential applicants:

The new company, Wise Health Solutions, is made up of members from a California cannabis industry training college and a compliance consultant and health specialist who helped create the medical marijuana program in Nevada.

But Republic representative Jered Taylor questioned Lyndall Fraker of the Health Department about why they were granted the contract- with the score they got. (:17)

Fraker and DHSS attorney Richard Moore explained that no one applied for the contract to be Missouri’s screener until DHSS relaxed the rule to allow the scoring company to take part in the Missouri medical marijuana business sooner.

Fraker said they were avoiding political influence and anticipating a large volume of applications  (1:11)

Rep. Maria Chapelle-Nadal, D-University City, pressed Fraker on the cost and scope of the lawsuits:

Committee members from both parties have requested testimony from the Office of Administration, which awarded the RFP to Wise Health.