You are here: Home / Archives for winter

The National Weather Service says despite some flurries, no more accumulating snow is expected today. 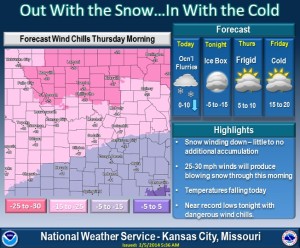 What forecasters like Mike July are concerned about is the wind that through the day is blowing snow into drifts and back onto cleared roads, but more importantly will lead to dangerous wind chills overnight through tomorrow morning.

“Especially when you get anything 25 below or colder we tend to lump it into the life threatening category,” says July. “Anybody that’s outdoors and not properly dressed and exposed skin … if you don’t take the right precautions and your outdoors for any extended period of time, it indeed can become life-threatening.”

Wind chills are predicted to reach as low as 26-degrees Farenheit below zero tomorrow morning in far northwest Missouri.

In southeast Missouri the Weather Service is also warning that winds could cause iced-over limbs to fall, and statewide a re-freezing of road surfaces is possible.

Two more storms are being predicted, one Friday night into Saturday and one Monday night into Tuesday, but July says neither of those is expected to be as strong as the one that just ended.

“The next couple of days we’re going to be in a very fast-moving environment. We’re going to have weak systems coming through … the farther you go down the road, the lower the confidence, unless we have a storm like this last one that we’d been looking at for almost a week in advance.”

July says both of those storms could produce some snow accumulation, but amounts are predicted to be much less than this last storm. It will fall on top of the snow now on the ground, he says, as temperatures are expected to remain cold through next week.

Some parts of north Missouri are reporting as much as a foot of new snow making for 16 inches of snow on the ground, and wind has blown drifts reported as deep as 30 inches.

Many Missourians turned on their heaters for the first time last week as temperatures in some parts of the state dropped into the lower 20s, prompting officials to remind Missourians about home heating safety. 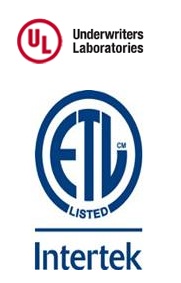 State Fire Marshall Randy Cole urges Missourians to look for the mark of a national testing laboratory, such as these for Underwriters Laboratories and Intertek, when buying heating appliances.

Many Missourians burn wood either in a fireplace or a wood burning stove. Cole says chimneys need to be maintained, and how often depends on what is being burned. “Obviously we don’t want you to burn unseasoned firewood. If you burn green wood it adds to the buildup of the creosote.” He recommends having all types of heating systems checked annually, and check flues every month for a buildup of creosote.”

Cole doesn’t recommend one type of heating system over another. He just encourages Missourians to make sure whatever they use is made by a reputable company. “Make sure that they appliances are nationally tested by a laboratory, for example your Underwriters Laboratory. Don’t use any appliances that don’t bear a nationally recognized laboratory testing mark.”

He says in the fatality cases his office is called to investigate it is often learned that smoke detectors and carbon monoxide detectors in the structure were inoperable. He urges Missourians to check those monthly, and take other precautions.

“We want to talk about making sure that you have an escape plan and a meeting place outside. If a situation arises we want to make sure that everybody’s accounted for and not have a reason to reenter a home that is experiencing a fire.”

The National Weather Service offices that serve Missouri are going to try out an index to help predict power outages due to ice storms. 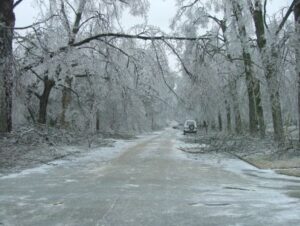 The index could be used to help prepare Missourians when ice storms, like this one that hit Springfield in 2007, are coming. (Photo courtesy: National Weather Service.)

Warning Coordination Meteorologist Andy Bailey at the Kansas City area Weather Service Office says information from the index will be added to forecasts to help Missourians prepare when outages are possible.

“If it’s one of these deals that it’s going to be a relatively quick and benign ice storm and it’s going to do little more than make the road slick for a while, people can prepare accordingly, but if it’s one of these catastrophic-type storms that is going to have widespread, regional impacts that last several weeks, certainly the actions they take to prepare for that should be different.”

Bailey says the index has been used in Oklahoma for several years and the electric distribution infrastructure there is considered comparable to that in Missouri. 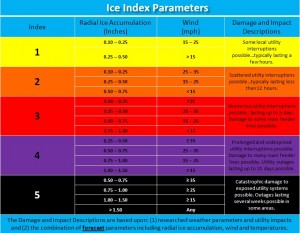 “Strength of the lines and the condition of the poles, age of the poles. Certainly when you go out around the state of Missouri there’s everything from brand new utilities poles to poles that are probably 20 years old and relatively weak. This is more for the average, middle of the road setup.”

Bailey says the index would allow the Weather Service to replace what have been “generic” statements about possible power outages with better predictions to help Missourians prepare.

Missouri has been hit by devastating ice storms before, including one in January, 2007 that left more than 200,000 people without power.

The Missouri Department of Transportation has completed the personnel changes that were a part of its Bolder 5-year Plan, including the reduction of more than 1,100 employees. On Wednesday the Department will hold a statewide drill to test its ability to respond to a winter storm. 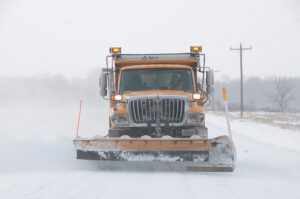 MODOT snowplows will be out on Halloween, but there isn’t expected to be any snow. (Picture courtesy: Missouri Department of Transportation)

Special Projects Coordinator Bob Brendel says it’s a chance for maintenance workers who have recently been hired or have changed districts to get used to new surroundings and routes.

“We’ve changed our district boundaries. We’ve reduced facilities. We’ve reduced employees. We’ve moved new people into maintenance. So, this drill is just going to simulate a snowstorm and deployment of our plows and people around the state.”

Department representatives have maintained that it can handle even a storm on the scale of the 2011 blizzard with its reduced and reshuffled staff. Brendel says there is no doubt about that.  “We absolutely can. It’s just, our response is going to look a little different because we’re operating from fewer facilities. We may not get to some routes as quickly as we did before, but we will get to them.”

The staff won’t know how bad the storm being simulated is until the drill is underway.  “Part of the drill is activating our emergency operations centers, our communications system and then letting (maintenance staff) know what size storm is on the horizon.”

Brendel says Missourians shouldn’t be surprised by what they see on Wednesday.  “Recognize that there are going to be MODOT trucks out with plows on them and although they’re not going to be spreading salt or actually plowing anything, you still need to give them room when they’re out there on the highways.”

Crews in rural areas will deploy after 8 a.m. In urban areas the drill will begin after 9 a.m. It will take approximately six hours.

The National Oceanic and Atmospheric Administration is predicting warmer and drier than normal conditions in much of Missouri for December, January and February. 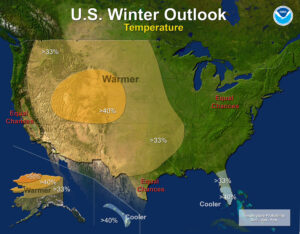 Click the image to go to NOAA’s winter outlook.

Deputy Director of the Administration’s Climate Prediction Center Mike Halpert says NOAA’s winter outlook calls for above normal temperatures in, “much of Texas northward through the Central and Northern Plains and westward across the Southwest, the Northern Rockies and the eastern halves of Washington, Oregon and California as well as the northern two-thirds of Alaska.”

As for whether or not this year’s historic drought will continue, the report doesn’t cover that but Halpert refers to the climate center’s drought outlook that extends to about halfway through January.

“The large majority of that drought we expect to persist. Kind of a negative thing is that we even see drought expanding westward along the northern tier, so into Montana and Idaho and parts of Oregon and Washington. Really, if you look at the precipitation forecast, the favored category where there is one is all for “below.”

The outlook is based on what are seen as the mostly likely probable outcomes, but Halpert says they could change. One variable is what he calls an “indecisive El Nino” this year.

“Typically by mid October we have a clear picture of the emerging climate factors that will influence the winter season, including whether El Nino or La Nina will occur. That has not been the case this year, however. A few months ago El Nino appeared likely to develop and persist through the winter but its development abruptly halted last month and sea surface temperatures across the Equatorial Pacific have largely returned to normal. We do still see some signs, however, that El Nino could still develop over the next few months and that possibility was taken into account for this outlook.”