You are here: Home / Archives for winter weather kit

The National Weather Service (NWS) in Pleasant Hill is urging you to get a full tank of gas and to charge your cell phones, before a winter storm impacts much of Missouri on Sunday afternoon into Monday. 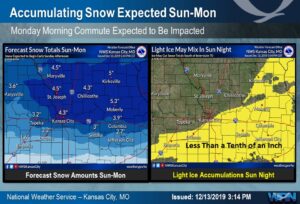 “St. Joseph over to Chillicothe and up to Kirksville right now looks to be that area where we could see the most, right along that Highway 36 corridor,” Mell says.

Towns like Hamilton, Brookfield and Macon can also expect three to five inches of snow.

Mell tells Missourinet the I-44 corridor between Springfield and Rolla will likely see some ice.

“Down near I-44, I think is probably going to be that best area where we receive that (ice). Could be looking as far north as Columbia and Jefferson City,” says Mell.

While they could see some ice, Mell says the Columbia, Boonville and Jefferson City areas will likely receive snow, about two to four inches.

The NWS advises you to keep a winter weather kit in your vehicle, and to pay close attention to the weather forecast throughout the weekend. Mell notes specifics could change by Sunday, as the system moves closer to Missouri.