You are here: Home / Archives for winter storms

Missouri’s State Senate leader says nothing on the Senate’s agenda this week was time-sensitive or worth lawmakers trying to drive to Jefferson City in snow. 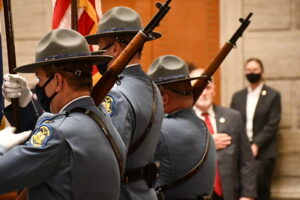 “So there was nothing so pressing that it was worth risking members trying to get into the Capitol,” Schatz says.

“We know that everyday that we do lose is something that will be precious time that would be garnered sometime later in session, but we’ll take that into consideration and we know that we’ll have to move some things, maybe spend some longer evenings there (the Missouri Capitol) in the future to try to make up for some of the lost time,” says Schatz.

The Pro Tem says mild weather will finally return to the Show-Me State next week.

“I think next week we’re looking at temperatures are going to be in the 50s again,” Schatz says. “We go from having this completely minus-zero and below to 50s next week, so that’s Missouri weather for you.”

Schatz says the temperature was minus-4 at his home in eastern Missouri’s Sullivan on Tuesday, with very slick roads.

Click here to listen to the full interview between Missourinet’s Brian Hauswirth and Senate President Pro Tem Dave Schatz, R-Sullivan, which was recorded on February 16, 2021: