You are here: Home / Archives for Winter storm warning

The National Weather Service (NWS) is urging most Missourians to avoid traveling most of New Year’s Day, as a major winter storm approaches from the south. 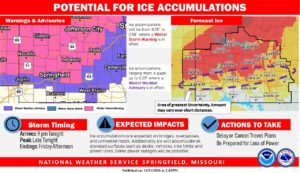 “Generally along that Butler to Sedalia to Moberly line, including Columbia, Jefferson City and some areas south of there … could see a quarter-of-an-inch all the way up to perhaps a half-an-inch of ice accumulation,” Pietrycha says.

Mid-Missouri’s Boonville and northeast Missouri’s Hannibal are also included in the warning area.

Many other parts of Missouri will be under a winter weather advisory. Northwest Missouri’s St. Joseph and Trenton are in the advisory area.

“We’re looking at about one to three inches (of snow), possibly some people on the south side of St. Joe (St. Joseph), down towards the Kansas City area would see a little bit higher snowfall,” Pietrycha says.

Meantime, the NWS Springfield office says southwest Missouri’s Lebanon and Bolivar could see up to a half-inch of ice. Waynesville, which is near Fort Leonard Wood, could get a quarter-of-an-inch of ice.

Those areas are all under a winter storm warning, along with Osage Beach.

The NWS Springfield office is urging residents across the Ozarks to be prepared for the loss of power.

A winter storm warning remains in effect until 6 o’clock on Wednesday morning in northwest and far northern Missouri. Impacted towns include St. Joseph, Bethany, Maryville and Trenton, as well as numerous farming communities in that region. 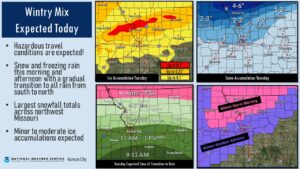 National Weather Service (NWS) Pleasant Hill meteorologist Spencer Mell says there’s four inches of snow on the ground in Atchison County, which is on the border with Iowa and Nebraska.

“We’re seeing a lot of this transition from a snow scenario over to sleet and even some freezing rain. We did see anywhere from one to four inches (of snow) across those areas this morning,” Mell says.

The state Department of Transportation (MoDOT) says most roadways in northern Missouri are covered with snow or some ice. They’re urging north Missourians to stay at home if possible, and to use extreme caution if driving.

Our Bethany affiliate KAAN reports about an inch of snow on the ground, along with sleet this afternoon.

Meteorologist Mell says those communities are also seeing some ice.

“Right now we’re hovering right around freezing, so we’re still seeing a little bit of light freezing rain. Expect that to continue here through the afternoon, I think most of those areas have seen the worst of it,” says Mell.

MoDOT Kansas City crews are urging residents in the Kansas City metro and in western Missouri to stay alert, to brake carefully and to stay home, if possible. Mell notes there’s been freezing rain today near Lee’s Summit, as well as Raymore and Pleasant Hill.

“It’s really just a sheet of ice out there so fortunately, MoDOT has got out there and treated some of these roads, but some of this freezing rain came pretty quick,” Mell says.

The Missouri State Highway Patrol is also urging you to slow down, in winter weather. Troopers say that during inclement weather, driving the speed limit is often too fast and not “exercising the highest degree of care.”