You are here: Home / Archives for William Rousan

The state of Missouri has carried out the execution of William Rousan, who was convicted of the murders of Grace and Charles Lewis in 1993.

Following his execution early Wednesday morning, one of the Lewises’ children, Michael, read the following statement to the media:

“I draw no real satisfaction from Mr. Rousan’s incarceration or execution, for neither can replace or restore the moments lost with my parents or give my sons back the grandparents they never got to know. Nor can it fully heal the broken hearts and lives of our family, or his family who my heart also goes out to.

“I hope that Mr. Rousan made peace with Jesus, for that is what Charles and Grace Lewis would want, for sure.

As for the death penalty, I think the delay from sentencing to finalization is too long. I have never thought of it as revenge or justice served in terms of an “eye for eye” so to speak. Nor do I see it as a big deterrent to would be criminals. But I still believe it is a humane and permanent prevention of further criminal activities by the convicted inmate.”

Lewis declined to take questions from the media. He was joined at the Eastern Reception, Diagnostic and Correctional Center in Bonne Terre by his wife, two sisters and a brother-in-law, none of whom spoke to the media.

The state has carried out the execution of 57-year-old William Rousan, who was convicted of the 1993 murders of a rural southeast Missouri couple in 1993. He died by lethal injection at the Eastern Reception, Diagnostic and Correctional Center at Bonne Terre, not far from where he committed the murders for which he was condemned. 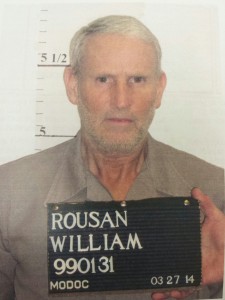 A lethal dose of pentobarbital was administered at approximately 12:01.  When the curtain to the execution chamber was pulled back, Rousan was speaking continuously and looked at two people in the chamber where witnesses there for him sat.  Some witnesses thought he told them, “I love you.”  Less than a minute later he took two deep breaths and then stopped moving.  He was officially pronounced dead at 12:10.

Rousan was visited during the day by three siblings and one brother’s spouse, a ministerial volunteer and a man identified as a friend of Rousan’s. Five members of the victim’s family witnessed the execution.

Rousan’s execution proceeded after the U.S. Supreme Court on Tuesday refused to stay his execution. His attorneys argued that secrecy regarding Missouri’s supply of pentobarbital could allow the use of a drug that would cause him undue suffering during his execution. Governor Jay Nixon (D) later denied a request for clemency for Rousan.

Rousan’s is the sixth execution carried out in as many months in Missouri. Russell Bucklew is scheduled to be executed May 21 for the 1996 murder of Michael Sanders.

On September 21, 1993, William, Brent and Robert Rousan discussed killing the Lewises on the way to the couple’s farm and agreed that “if it had to be done it had to be done.” They parked about 2 miles from the farm, pointing out the cattle they would steal as they drove past.

William and Brent Rousan argued about who would carry a .22 caliber rifle as they hiked through the woods toward the Lewis’ farm. The son said he was “man enough to do whatever needed to be done,” and his father eventually gave him the gun. He warned Brent that if they were caught they would “fry.” The three hid behind a fallen tree and waited for the couple.

As Charles Lewis was mowing the lawn he was fatally shot by Brent Rousan. Grace told her daughter on the phone she heard the gunshots and hung up to investigate. When she went outside she was shot by Brent Rousan but ran back inside the home. William Rousan followed her, put a garment bag over the upper part of her body and carried her back outside. He told Brent to “finish her off,” and the boy fired one shot into the side of her head killing her.

The Rousans took two cows, a VCR, jewelry, soda, two gas cans and a saddle. They buried Mr. and Mrs. Lewis later that night in a shallow grave and covered it with cement and manure.

The tree escaped capture for nearly a year before the VCR was sold to a pawn shop, leading police to the Rousans.

Robert Rousan testified against his brother and pleaded guilty to second degree murder. He has since been released from prison. Brent Rousan is serving a life sentence.

Attorney General Chris Koster has released a statement regarding the execution Wednesday morning of William Rousan for the 1993 murder of Grace Lewis.

Koster writes, “William Rousan displayed an appalling indifference to human life in the murders of Charles and Grace Lewis. He showed his true character by ordering his 16-year-old son to kill Mrs. Lewis, all so they could steal two cows, soda, a VCR, and some jewelry. Tonight he paid the price the jury recommended nearly 18 years ago. My thoughts and prayers are with the family and friends of Charles and Grace Lewis.”

Governor Jay Nixon has issued a statement regarding the execution of William Rousan for the 1993 murder of Grace Lewis.  Nixon on Tuesday denied a request for clemency for Rousan.

In his statement, Nixon says, “Our thoughts and prayers tonight are with the family and friends of Grace and Charles Lewis, as they remember a couple murdered in a brutal and senseless crime.

“William Rousan was convicted of both killings and sentenced to the ultimate punishment provided by Missouri law for the murder of Grace Lewis. That sentence now has been carried out.

I ask that Missourians remember the Lewises at this time and join us in keeping their loved ones in their thoughts and prayers.”

The State Supreme Court has set an execution date for condemned inmate 45-year-old Russell Bucklew. He is sentenced to die by lethal injection May 21 at the Eastern Reception, Diagnostic and Correctional Center in Bonne Terre. 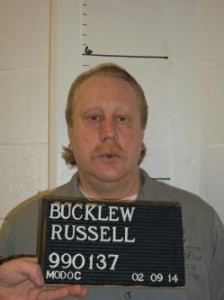 Bucklew was sentenced to death for the 1996 murder of Michael Sanders, who he had assumed to be the new boyfriend of his ex girlfriend. Bucklew shot Sanders in front of Sanders’ 6-year-old son in a jealous rage, then held the gun to his ex’s head. When he saw Sanders’ son he shot at the boy, missing him. He then kidnapped his ex-girlfriend and raped her when she denied his advances. He was caught after a gunfight that left him and a Highway Patrolman wounded.

Bucklew’s attorneys had argued to the Court that he suffers from malformed blood vessels that cause among other things, bleeding from his mouth and eyes, and could increase the risk of a painful or prolonged lethal injection. The state argued that doesn’t merit an indefinite delay in setting his execution date.

The state is next scheduled to carry out the execution of William Rousan on April 23. Rousan was involved in the cattle theft, robbery and murder of a farm couple, Charles and Grace Lewis in rural Bonne Terre in 1993.