You are here: Home / Archives for wildlife code regulations

State Rep. Chris Dinkins, R-Annapolis, has filed a House joint resolution that would increase the commission’s membership to nine nonpartisan members: one appointed by the governor and eight elected from each Conservation region. Her legislation will be heard Monday evening by the House Conservation and Natural Resources Committee. 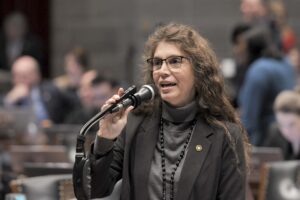 “This has been brought to my attention numerous times and I think it’s important that the rural people also have representation on this commission,” Dinkins says.

Bedell serves as the chair, and Orscheln is the vice chair. McHenry is the secretary, and Harrison is a member. Commissioners are responsible for appointing the Conservation director, and serve as policy makers and approve wildlife code regulations. They’re also involved with strategic planning.

If lawmakers approve Dinkins’ resolution this session, it would go to the statewide ballot in 2022.

“And this would ensure that everyone has representation. It seems like (the Department of) Conservation has a lot to do with our rural communities, yet we don’t really have a voice,” says Dinkins.

The eight elected members would be elected in November 2024, under Representative Dinkin’s House Joint Resolution 55.

Dinkins says there has already been a lot of written testimony submitted about her bill, and predicts rural communities will support it.

She also acknowledges that there will be opposition to it as well, and notes her bill last year didn’t get much traction.

Monday’s hearing begins at 5 p.m. at the Statehouse in Jefferson City.

Click here to listen to Brian Hauswirth’s full interview with State Rep. Chris Dinkins, R-Annapolis, which was recorded on February 19, 2021: