Funeral services are scheduled for Saturday morning in Lee’s Summit for a firefighter/paramedic who died Sunday (January 5) while battling a house fire in western Missouri’s Peculiar. 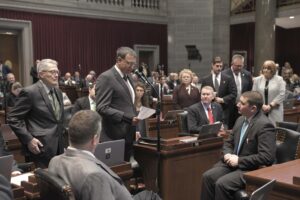 The service will begin Saturday at 11 a.m. at Abundant Life Church. Firefighters from across the state are expected to attend.

“Firefighter-paramedic Charles McCormick lived his life as a devoted public servant committed to protecting others,” Governor Parson said in a written statement. “He made the ultimate sacrifice, and he will always be remembered for his legacy of bravely serving his community, state and nation so that others could be safe. Firefighter-Paramedic McCormick’s tragic passing serves as a reminder of the sacrifices made by members of Missouri’s fire service, who take on risks each day to protect their neighbors and people they may never meet.”

During Wednesday’s opening day of the 2020 legislative session in Jefferson City, the Missouri House honored the 30-year-old McCormick with a moment of silence.

“We’re deeply saddened by this tragic loss,” Haffner said on the House floor. “Our first responders make great sacrifices to serve and protect.”

“We’re eternally grateful for his service and his sacrifice. On behalf of the people of the great state of Missouri, I would like to extend our deepest sympathies to his fellow firefighters, particularly to his family,” Haffner said on the floor.

Governor Parson says McCormick is survived by his wife and three young sons.

Click here to listen to the Missouri House floor comments from State Rep. Mike Haffner, which took place on January 8, 2020 in Jefferson City: