You are here: Home / Archives for Wendy Doyle

America’s first female county clerk has been inducted into the Hall of Famous Missourians. A bronze bust of Annie White Baxter of southwest Missouri’s Carthage joins 47 others in the esteemed hall already showcasing journalist Walter Cronkite, radio host Rush Limbaugh, and the 33rd U.S. President – Harry Truman. They line the third floor of the Missouri Capitol Rotunda in Jefferson City to pay tribute to the legacy they have left. 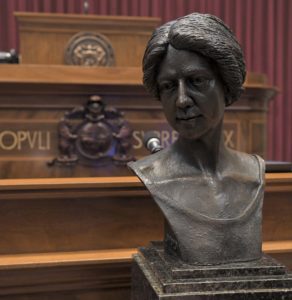 As House Speaker, Elijah Haahr, R-Springfield, gets the final say on who is inducted into the hall. During a ceremony today in the Missouri House of Representatives, White Baxter was remembered as one of the state’s best county clerks and a political trailblazer.

In 1890, she defeated her opponent by about 400 votes to become the Jasper County Clerk during a time when women did not have the right to vote. White Baxter, a Democrat, later served as state registrar of lands and financial secretary of the Missouri Constitutional Convention.

Her induction coincides with today being Women’s Equality Day to commemorate the 1920 adoption of the 19th Amendment to the U.S. Constitution – prohibiting government from denying the right of American citizens to vote based on gender. Women of color were not guaranteed the right to vote until later.

“Thank you for allowing her to pave the way for the 85 female county clerks and personal friends serving throughout the 114 counties in Missouri today,” she said.

The Pledge of Allegiance was then flawlessly led by Haahr’s three daughters.

Former state Rep. Charlie Davis, the current Jasper County Clerk, said White Baxter blazed the trail for women – not only in Missouri but in America. He notes the county auditor, assessor, circuit clerk, public administrator, prosecuting attorney, recorder of deeds and treasurer in Jasper County are all women.

“It’s amazing that half of our elected officials in Jasper County are women,” he said. “That kind of shows the importance that women place on our society, but especially our community of Jasper County.”

According to Davis, a bust of White Baxter will also be placed in the Jasper County Courthouse.

Wendy Doyle, the President and CEO of Women’s Foundation, said millions of people who visit the Missouri Capitol each year, including many students, will enjoy the symbol of inspiration that White Baxter represents.

“I’m thrilled she’s getting the recognition she finally deserves,” she said. “By writing women back into history, we can ensure that women can see themselves in the change makers and barrier breakers of the past.”

“It’s important to the Women’s Foundation that we are able to go back in time to preserve legacies and history so that we can see how far we’ve come but also for us to see who we could be, to show women that there is a path forward – that we are working toward equality,” she said. “We are demonstrating to Missouri women that we are making progress.”

Haahr said putting White Baxter in the hall was a no-brainer.

“There’s a lot of really talented people that are not yet in the Hall of Famous Missourians. I started thinking about Annie White Baxter back in 2018 when I first became Speaker. It made a lot of sense – it’s the 100th General Assembly, it’s the 100th anniversary of women’s right to vote. So, it all kind of dovetails together,” said Haahr.

He hopes today’s event will serve as a learning experience for his three daughters.

“My mom was my first political advisor,” he said. “But having three daughters, they are going to grow up in a world where they are never going to worry about not being able to vote, not being able to hold office. And so for me, without having to go through that struggle to remind them of the people that did, I feel like is very important.”

The sculpture was crafted by E. Spencer Schubert of Kansas City.