You are here: Home / Archives for Wayne Dean Jackson

It’s been more than 61 years and Dodson still wants to bring Jackson, an Air Force Airman 3rd Class from Downing, Missouri, home and out of that snow.

He was one of 52 people on a military plane that during a storm on November 22, 1952, crashed into Mount Gannett in Alaska, killing everyone on board. The C-124 Globemaster, nicknamed “Old Shaky,” was found a short time later by a search crew but before any passenger or crew remains could be recovered, it was covered over by snow and ice and lost for 60 years. Then in 2012, Alaska National Guardsmen flying over the Colony glacier rediscovered its wreckage.

On June 18 the Department of Defense announced that remains had been identified as belonging to 17 men who were on that flight, and were being returned to their families for burial with full military honors.

Wayne Dean Jackson was not one of those men, but Dodson wants people to know that he still has people who care about him and still hope he will be brought home.

Missing but not forgotten 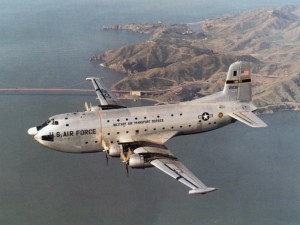 Dodson was seven at the time of the crash and considered Jackson a big brother. She now has legal status to be notified if and when any of his remains are recovered, and is in contact with a network of other families who lost someone on that plane. Several of them did receive notification that remains from their loved ones had been found.

“I was so happy for them … but yet inside you’re sick,” says Dodson. “It’s not that we didn’t want them to get that (notification), because we did … but I wanted to say Airman Third Class Wayne Dean Jackson is coming home … It’s like the air went out of me,” Dodson continues. “But now, I’m going again … and we’re hopeful.”

Dodson is hopeful because she anticipates more recovery efforts will happen. DOD says in its release from the 18th that the site will be monitored for future possible recovery.

Jackson was one of two Missourians on that plane. The other was Army Technical Sergeant Leonard George Unger of Gerald. His brother-in-law is Sylvester Bowland of New Haven, who met Unger when dating his now-wife, Theresa.

“He was a little guy,” says Bowland. “He was short, maybe 5′ 2″ or 5′ 3″, and his mother asked him many times, ‘Leonard, why don’t you get out of service? It just doesn’t sound too safe anymore,’ and he said, ‘Don’t worry about this little guy. He’ll take care of himself.'”

Bowland says Unger’s family held a memorial service for him but, like Jackson’s family, still hope his remains will be found.

“There was eight children and Leonard was the oldest of the eight, and everybody was hoping (in 2012 when the plane was re-discovered),” says Bowland. “Everybody kind of got their hopes up. It’s 60 years ago but we have not forgotten.”

Both Unger and Jackson might not have been on that plane but for key decisions each of them made. 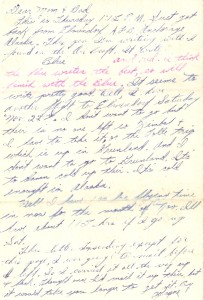 The letter Wayne Dean Jackson wrote to his parents the day before the crash. (courtesy; Vicki Kelso Dodson)

“Leonard was not supposed to be on that plane,” says Bowland. “There was a young soldier who had planned his wedding and he was planning on getting married, and Leonard said, ‘Well my gosh, that’s a big event for you.’ He said, ‘I tell you what, I’ll just take your place.'”

Bowland adds, “That’s the kind of guy that Leonard was,”

Dodson has a letter that Jackson wrote the day before the crash to his parents. In it he said there had been another option – a flight that would have taken him to Greenland. Jackson opted for the C-124 trip from McChord Air Force Base in Washington State to Elmendorf Air Force Base near Anchorage, Alaska because he didn’t want to go to Greenland.

“It’s too damn cold up there,” he wrote. “It’s cold enough in Alaska.”

For families that don’t have remains coming home, there is at least one memorial to their loved ones. This past April the Alaska Historical Commission approved a request to dub the previously unnamed peak the plane crashed into, Globemaster Peak, in honor of the 52 that died in the accident.

Thanks to Vicki Kelso Dodson, Sylvester and Theresa Bowland, and Tonja Anderson-Dell for contributing to this story.  Visit the website maintained by Anderson-Dell about the crash and surviving families, at www.findingthosewelost.com.

None of the remains recovered so far from the site of a Korean War-era Air Force plane crash site in Alaska are those of two Missourians who were on that plane. 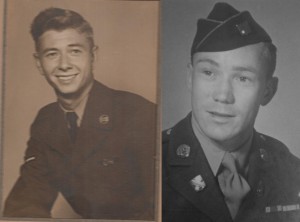 Army Technical Sergeant Leonard George Unger of Gerald, in east-central Missouri, and Air Force Airman 3rd Class Wayne Dean Jackson of Downing, in northeast Missouri, were on the C-124 Globemaster that on November 22, 1952, crashed into a mountain due to poor visibility in a storm. In June, 2012 wreckage and debris from that crash were rediscovered in the Colony Glacier.

DoD says the crash site will be monitored for possible future recoveries.