You are here: Home / Archives for Warren Love

A House Committee has heard a proposal that would make changes to Missouri law governing out wage rates are set for public building projects.

Representative Warren Love (R-Osceola) proposes having the Department of Labor and Industrial Relations set prevailing hourly wages at the state average weekly wage as determined by the department for each occupational title in the area.

Attorney Jim Fall with the Missouri AFL-CIO says even though the new law took effect August 28, its impacts are still not known.

Proponents of the bill say last year’s legislation was more narrowly focused and more reforms are needed. They argue that allowing lower wages to be paid on public projects would stimulate more jobs by lowering overall costs and letting projects be undertaken.

Critics like Representative Michael Frame (R-Eureka) say the real goal is simply to lower worker’s wages to benefit local governments whose taxes are too low to be able to afford needed public works projects.

“You haven’t stepped up to the plate to make a tax where you can pay for these folks, but you’re saying, ‘Your wage is too high. We’re asking you to give us some type of entitlement here … some type of handout here … and charge less in our counties because we’re not willing to tax ourselves at a rate to employ you.”

The legislation has not received a vote.

A state representative from western Missouri faces up to a year in jail and a $1,000 fine after being convicted of misdemeanor animal abuse. 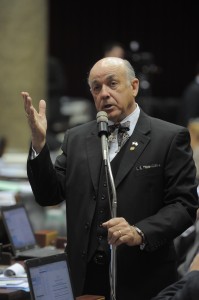 The charge was filed against Representative Warren Love (R-Osceola) in September, 2012 in connection with cattle escaping his pasture. The prosecutor said Love knowingly failed to provide adequate control of the animals.

Love was one of the lawmakers that voted last month to override Governor Jay Nixon’s veto of legislation including a change in Missouri’s animal abuse and neglect law.

Love is in his first term in the House.

Russ Warren of KNEM in Nevada contributed to this report.

The House has given its blessing to letting people 21 and older ride motorcycles on Missouri highways without helmets. 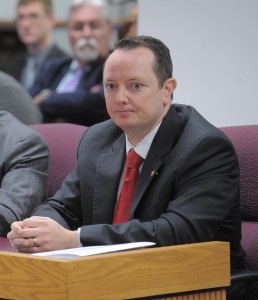 Representative Warren Love (R-Osceola) says he chooses to ride with a helmet for safety, but there are many who don’t … and those riders carry good money.

The idea had bipartisan support … and bipartisan opposition. Representative Diane Franklin (R-Camdenton) says as a health care professional, she has seen what happens to people who have been in motorcycle accidents.

“Wearing a helmet does not just affect the individual. It affects everyone in the state of Missouri. It affects insurance premiums. Not wearing a helmet is allowing people to be injured when there’s no need for it. It’s not just a matter of personal choice. It’s not like a chronic condition or any other kind of medical condition like obesity, where there is more than one contributing factor. This is something that can easily be taken care of.”

The proposal goes to the Senate for consideration.