You are here: Home / Archives for University of Missouri Science & Technology

In 1870, legislation was signed into law creating what is now called the Missouri University of Science & Technology – making it one of the first higher education technology institutions west of the Mississippi River. Previously, the school, located in central Missouri’s Rolla, was called the Missouri School of Mines and Metallurgy and then the University of Missouri-Rolla. 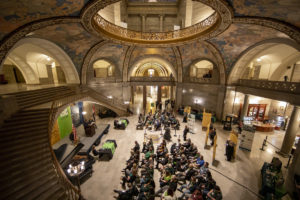 During a celebration today at the state Capitol in Jefferson City, University of Missouri System President Mun Choi says the next 150 years will be bright and strong for Missouri S & T.

“During the past 150 years, I can’t think of a university that had more of an impact in the scientific and engineering breakthroughs that fuel the economy of Missouri and the country,” says Choi.

He cites university researchers developing many things, including TheraSphere, a radiotherapy treatment to save liver cancer patients, and ways to prevent and find traumatic brain injuries in America’s warfighters.

“The average number of job offers that our graduates get is seven,” he says. “We have a sold out crowd of international companies that come to campus to recruit our graduates.”

Dehghani says the university’s graduates are the second-largest supplier of engineers and scientists to aerospace manufacturer Boeing’s worldwide operations and John Deer tractors. 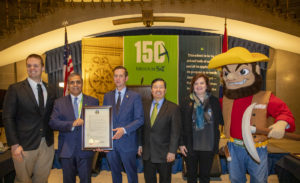 Larry Gragg, a Missouri S & T history professor Emeritus, has written a book about the university’s 150-year history. Forged in Gold comes out this fall.